On July 23rd we had a lovely storytelling session by Vikram Sridhar of Around the Story Tree. 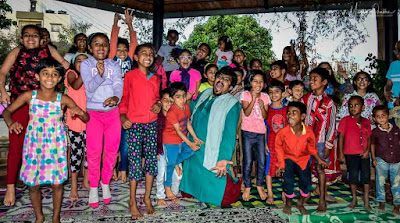 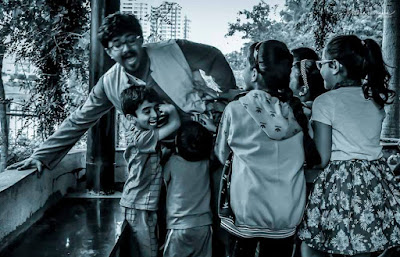 We asked a couple of parents who attended the session with their children to tell us what they thought about the storytelling event. Here is what they reported:

Report by Nidhi Chawla
Stories hold a special place in childhood. However, if as parents or grandparents we are unable to pass on this legacy to our young ones, there are new age story tellers to come to the rescue. Vikram Sridhar is one such professional story teller who came to tell stories to our kids last weekend at the Puttenahalli lake, JP Nagar.
His engaging style kept the kids involved and excited. The tale of Amur falcons interspersed with a message of conservation and a tale of two sister birds and their bonding seemed appropriate for the venue where the event was held - the Puttenahalli Lake, the pride of our neighborhood, conserved and maintained by PNLIT.
The kids vied for their turn to don the hats of a falcon, the hunter, the policeman and many other characters in the stories. Their laughter and the excited looks on their faces made it an afternoon spent well with the bonus of enjoying the splendor of nature in the middle of the city.

Report by Mithun Prabhu
Though a father of two children, I still remember listening to the stories told by my parents and grandparents and drifting off to sleep. Stories beautiful and engrossing, told with so much love. Those days are long gone as also perhaps the narrative skill in parents but thankfully we have a few enterprising and energetic Story Tellers like Vikram Sridhar who came to Puttenahalli Lake to tell children not one but two stories.
He came dressed in ethnic kurta and dhoti, started off with a bang, and from the word go engaged the kids, and pulled them into his stories. He lived the roles, made the kids join him, made them roll over in laughter, jump, dance and more importantly got everyone to speak up, answer his questions, participate in role playing, making it all a two way communication. The kids had a whale of a time that day, in a pristine lake environment, with green trees and a cool breeze blowing. It was not only the kids, but some of the parents too who were deeply engrossed in his stories, reliving perhaps their childhood days!
It was a splendid one hour spent with constructive and good use of the time, bonding between kids, parents and everyone assembled at the lake. All thanks to Vikram Sridhar and to Nupur, Usha, Sapana and team PNLIT.

Posted by PNLIT Admin (Arathi) at 6:01 PM No comments: