For the slum dwellers' relocation and rehabilitation, the Revenue Department had identified land in Bettadasanapura, (about 8 kms from the lake) in Sy.No.20, measuring 2 acres 24 guntas and handed over the same to the Karnataka Slum Development Board.

After obtaining written consent from each of the slum dwellers, BBMP agreed to fund the construction of the temporary sheds 10 x 12 feet in size. The Karnataka Slum Development Board agreed to build 1-BHK flats subsequently in the same site.

However, the slum dwellers not only rejected the alternate land allotted for their relocation, but in July 2018,  during the pendency of the writ petitions in the High Court, they also demolished the temporary sheds (fully constructed and ready for occupancy) - causing a loss of more than Rs.70 lakhs of public money.

The case of the Slum Dwellers was essentially that they had submitted a representation dated 23.09.2014, to the Government seeking for allotment of sites measuring 20 ft. x 30 ft, to the individual families living on the lake bund area, instead of the sheds constructed by the Karnataka Slum Development Board which they said were too small for their residential purposes.

In Feb 2019, the Karnataka Slum Development Board filed a contempt petition against the slum dwellers in the same writ petitions, for their illegal acts of demolishing the temporary sheds.

In March 2016, upon being persuaded, the Bruhat Bengaluru Mahanagara Palike, (BBMP) impleaded themselves as Respondent No.7 and came on record to oppose the writ petitions. Aggrieved by the long pendency of the writ petitions and lack of tangible progress, we, PNLIT, approached the Hon'ble High Court to seek for speedy adjudication.

During the final hearing of the writ petitions, the Karnataka Slum Development Board categorically submitted to the Court that the request of slum dwellers for 20 ft. x 30 ft. sites could not be considered by them under any law. Even the Court recognized the far reaching nature of such a request by persons who are illegally squatting on the lake bund area and who are rejecting the temporary housing which had been made available for their relocation.

The following observation was made by the Hon'ble High Court in its order dated 07.03.2019 :

On the one hand, we are relieved that after four years the Writ Petition finally has found closure. However, on the ground nothing will change till the three Respondents discuss the matter and resolve it in the best way they deem fit. We have been assured that they will take this issue for consideration in the last week of April 2019 - in view of their added responsibilities with the upcoming elections. Whether the request of the slum dwellers is considered favourably by the Government or not, they have earned protection to stay in the same area for the next twelve weeks, and till they are rehabilitated with basic amenities to an alternate location.

We sincerely hope that this time the slum dwellers will have the prudence to accept the decision of the Government - whatever that may be - and cooperate with their relocation from the lake bund area, so that the Puttenahalli Lake can be made secure and restored to the fullest extent.

The advent of another hot summer brings into focus, yet again, the absolute need for the conservation and preservation of one of the most precious of our resources, fresh water, whose scarcity has reached daunting levels. Basic water preservation techniques have become the need of the hour.  The life-threatening depletion, pollution and misuse of our fresh water resources do not augur well for future generations.
World Water Day, 22 March, has gone beyond the aura of symbolism to that of alarm and ominous warning.  Cities around the world have seen citizens' movements to counter the abuse of streams and lakes which are the life blood of fragile ecosystems, and to protect and preserve them.
Our beautiful Puttenahalli lake is an example of how we, as a community, can transform a once dying lake into a sparkling life-sustaining one with a rich diversity of flora and fauna.  Our heartfelt thanks to all our well wishers, partners, donors and supporters. 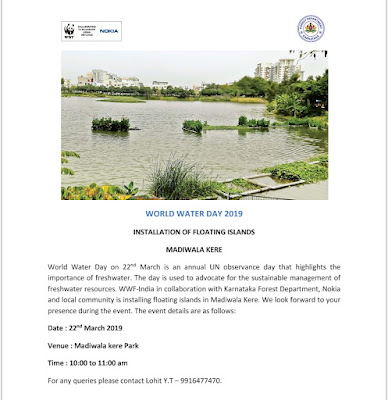 You will be happy to know that our Floating Island concept is the theme of this year's World Water Day celebration at Madiwala Lake. Do attend this event. If you are not able to, then go to our lake.
There is no better way to celebrate World Water Day than to spend some time at our pretty neighbourhood lake, a lung-space from the manic, time-bound, work driven city life and connect to where we first came from - water.
Save water!
Best regards
PNLIT team
Posted by Arathi Manay at 12:30 AM No comments:

Is there no end to man's greed?

The "Ides of March," 15th March, is historically important because that was the day Julius Ceasar was assassinated.  This day became important for us from 2018 because of the heavy downpour that evening which had led to sewage entering the lake and in turn led to a massive fish kill. It was a catastrophe that is imprinted in our minds. We stepped up our effort to improve the quality of the water and are in the process of installing a fountain as aerator. Our alarm bells began to ring when we heard that Yellappa the licensed fisherman at our lake wanted to release fingerlings.

In this heat? Will they survive? When the water level is falling drastically and many lakes are almost dry? But perhaps he knew better, we thought, because commercial fishing is his livelihood.

Day before yesterday, 12th March, Yellappa's men released fingerlings, a few hundreds, late in the evening. Yesterday morning walkers at the lake  called to report that fish was dying at the lake. When questioned, Yellappa coolly replied that it was just a trial. The Fisheries Department had issued an advisory against releasing fingerlings in this period. He had wanted to take a chance and gone against this advisory. 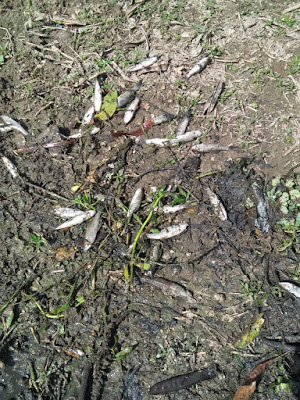 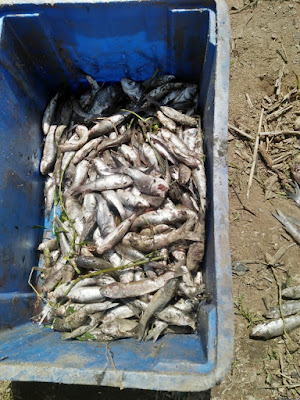 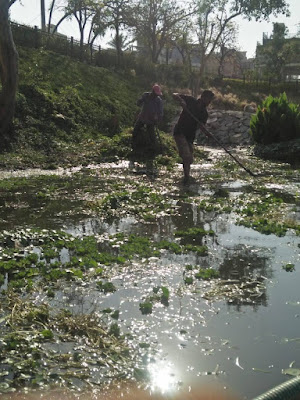 By the time his men came to remove the dead fish, our gardeners could not bear the sight and had taken out more than half a crate of dead fingerlings. Today morning some are still seen floating in the water. Small ones in hundreds. Dead for no fault of theirs.

Is there no end to man's greed?
Usha
Posted by Arathi Manay at 11:29 AM No comments:

Riot of Yellow Tabebuia at the lake and more

Different parts of the city are aflame with the glorious colours of pink and yellow of the Tabebuia rosea and aurea. Just these two flowers in profusion make our city a very special place to live in. Our lake is not lagging far behind. We have only one pink Tabebuia but the yellow ... ah! It's truly a magnificent sight of a line of the Tabebuia aurea ... a shower of gold indeed! Even if you don't go anywhere else to see the blooms, do visit the lake. 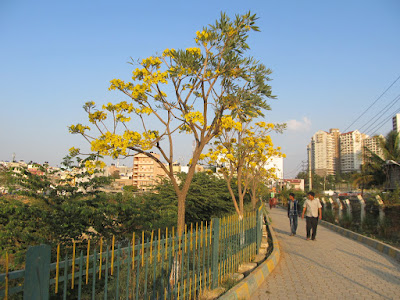 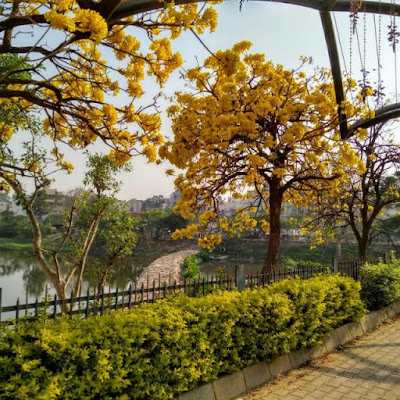 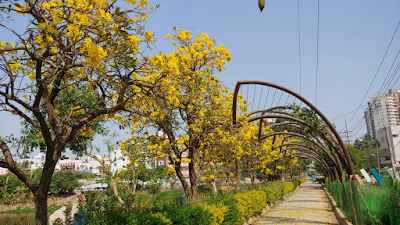 These are extra special because they were planted by our residents in July 2010 and because next to these is our pergola on which two of the climbers are flowering as well.

Racing to catch up with the yellow Tabebuia are the line of pink Cassia at the Brigade Millennium end. The branches are already loaded with buds.

While you are at the lake, do look out for the bird nesting boxes - One each on the Kadamba and Buddha Coconut. We plan to put up a few more. Heartfelt thanks to naturalists Mr. Uday Kumar and Mr. J.N. Prasad for donating these nesting boxes. 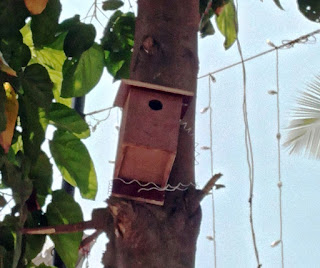 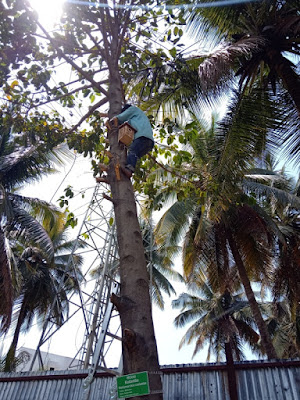 Our gardener Soma fixing a nesting box on the Kadamba Tree

Visit the lake and enjoy the riot of colours!
Best
Usha 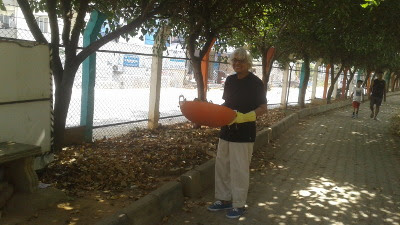 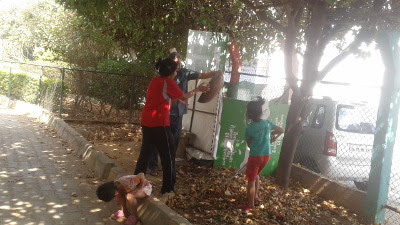 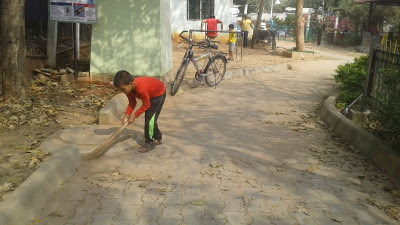 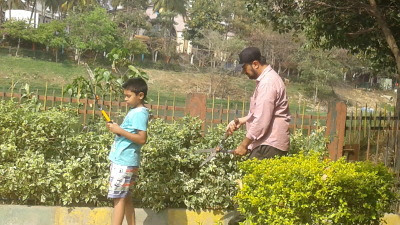 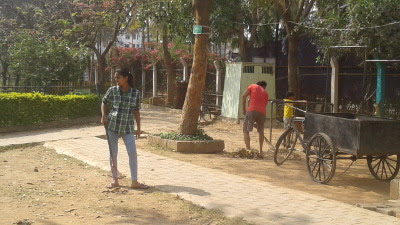 There is no better way to get away from a sterile digital world and into the wonderful elemental world of nature than to spend some time at our neighborhood  lake. Therefore, the soaring day temperatures did not keep away the 13 odd children and adults from participating in an enjoyable, full-fledged gardening session yesterday morning at the lake. We had a pleasurable two hours of weeding, clipping hedges, shoveling dead leaves and sweeping the walkways clean, all in the backdrop of the sparkling lake.

The boundless enthusiasm and energy of the young ones was heartening. One mother who had come with her two young daughters told me: "Nothing can be more healing than this. We city people need it."

This echoes what the famous naturalist Rachel Carson said- " city dwellers need to find some place to open up the disused channels of sensory perception." I am sure she would recommend Puttenahalli lake!

Our next Family Gardening Fun Day will be on April 6th @ 9:30AM.

Posted by Arathi Manay at 7:07 PM No comments:

Report on our first theatre workshop

The huge wedding hoardings in our neighbouring marriage convention hall blocked the entrance to our lake from Brigade Millennium side in addition to causing traffic jam right across the gate! We, the PNLIT volunteers were agitated as parents couldn't park their vehicles and had to find a way to bring the children inside the gate. With mercury already rising, it didn't look like a good start to our first theatre workshop that was condyucted on Sunday morning (24th Feb) by Dr. Sonali Sathaye.Nature had other plans, the cool breeze from the lake and the shade of our Gazebo and trees calmed things down while Sonali worked her magic on the 16 children who had assembled. The wedding, the traffic jam and their noises faded into the background. 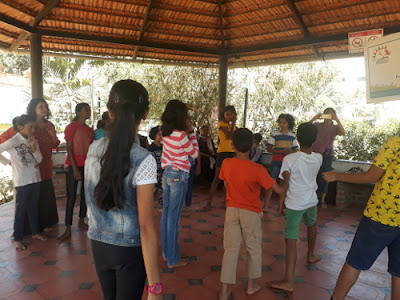 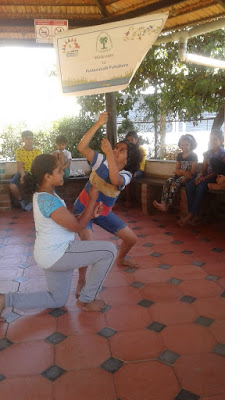 The workshop started with a couple of interesting games as ice breakers which made the children get to know each other. Then came the body movement and vocal exercises which made them alert and aware. Enactment with expressions - exaggerated expressions - made them laugh at each other's silliness. Sonali then made the kids do an interesting exercise of observing any movement in and around the lake and enacting it. Initial hesitancy had given way to openness and the children flapped their hands happily like birds and butterflies, swayed like trees, rowed boats and drove cars! 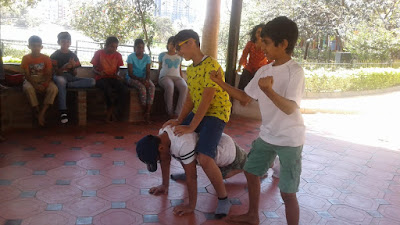 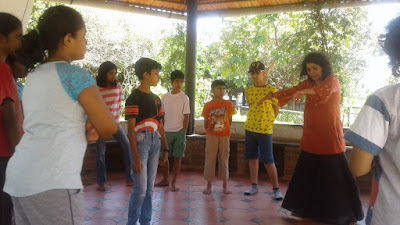 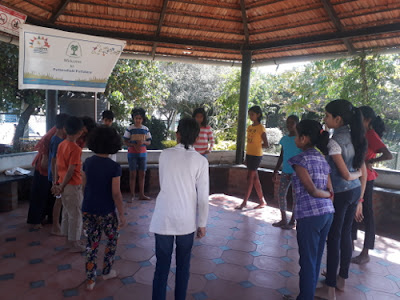 Lastly, teams were made and each was given a short scene to enact (that included the movement and expressions learned earlier), which the audience had to guess. How those two hours flew by, we couldn't say (though the traffic jam and the honks were still going strong!!).

We asked the children to share their experiences and here is what a couple of them said:
The workshop was great fun on the whole. At first, I was nervous. But later, I became more involved. It was fun working in groups. I got to know a lot of people. It was done in a simple yet engaging manner. I am glad I came.
Avani (10 years)The theatre workshop conducted by Sonali aunty at Puttenahalli Lake was an interesting event. First she made us observe all the living and non- living things in the lake and then told us to act like those things. I learnt to make different types of movements and expressions. She taught us to speak clearly, slowly and loudly. I learnt to be confident and not be shy. I want to attend more events like this at the lake.
Jayadithya (10 years old)We look forward to hosting more of such events which connect both children and adults to the natural world around us.SapanaPNLIT Event Co-ordinator
Posted by Arathi Manay at 10:38 PM No comments: