About ten of us spent a couple of hours on Sunday morning (the 17th of July) at our Puttakere covering as much as ten metres. And yet, even as we appeared to move hardly at all, Time flew!  There was just so much to keep us absorbed. The space was a compressed scroll, opening out into discoveries of sight and sound and scent - and eventually, even taste! Kaustubh Rau who led the Bioblitz began by having us look closely at the trunk of the mahogany on which fire ants (an invasive species, apparently) ran up and down sticking and stitching their leafy nests even as the lichen grew slowly, patiently. Those ants looked like ants but we also saw "spiders" which turned out to be ants, spiders who strung up their egg sacs (little green dots) in their nest-webs, spiders who left their "signatures" in their webs. What an intricate world theirs is!

It was a beautiful morning, shot through with that special silver-gold light of the monsoon (when it's not raining). A pair of dragonflies were locked in a long embrace, butterflies flitted about, coots and grebes chased each other  in a flurry of wings across the water. At one point mynahs started calling out loudly. We turned to see what the cackling was about and watched as the mynahs escorted a long rat snake (most probably) across the path, heckling it all the while. 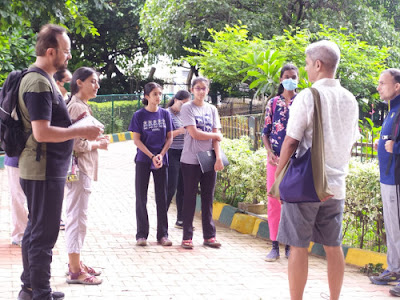 We saw cormorants, darters, purple moor hens, egrets, water hens, coots, spot billed ducks, a swooping brahminy kite, a slider turtle, all hanging out comfortably in what was evidently their home - sitting on the perches, drying their wings, staring out at the water, occasionally chatting with each other or diving into the water for a snack. A mother grebe left her nest with three little chicks following. The fourth eventually left, hitching a ride on daddy's back! 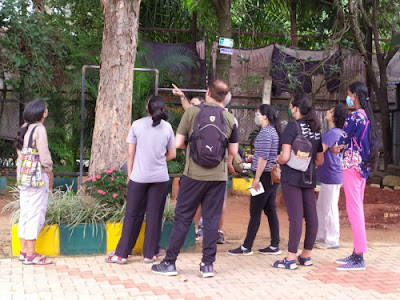 In those two hours, we peered down, gazed up, crinkled our eyes to stare at movements across the water. There were strange beautiful fruit dangling from gorgeous broad-leafed exotic trees (the "Buddha Coconut" tree); the Kadam, the "badminton ball" (even though, as one participant pointed out, badminton is not actually played with a ball!) tree, a huge leafed "money plant", the cassia, the "pride of India", all held our attention. Eventually we ended up at a shortish tree (tall-ish shrub) studded with bright red "cherries". Delicious!

Nearing the end of the walk, we spotted a darter trying to rid itself of what looked like a ball of string from its beak, desperately rubbing it against various surfaces. It was painful to watch. The bird was evidently in some distress. The trustees were informed and they called the ARRC, hoping they would be able to bring some relief to the bird- they had released a fishing net from the beak of another darter only a week ago. The next day, we got to know that the darter had not allowed the rescue team anywhere near. No matter; it turned out that the bird had managed to get rid of the string ball all by itself, no human intervention needed after all.

Bioblitz or no, humans reverently gazing at them or just hurrying past or no, creatures live out their compelling lives - and although in a sane world their ability to do so should not lie within the power of humans, at the moment it does.  Photographs when uploaded on to the inaturalist.org platform (under "Puttenahalli Lake") allows for all these to live out their natural lives on this planet as they were meant to do. 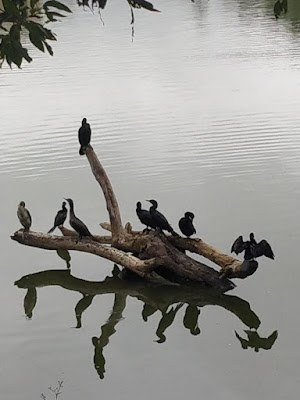