The lake never ceases to surprise and delight us. Usually it is a new bird that we spot in the water or flying around, doing a recce. The water level rising gives us another high. Trees shooting up, especially during the rainy season. A new flower, butterfly, dragonfly, an insect never seen before, a snake crossing the path.... the list goes on but this is about the Water Lily.

We'd planted pink water lilies at various places in the lake late last year and watched with delight when they caught on and started flowering. Our ecstasy turned to agony when a Common Coot decided to build its nest right in the middle of the water lily! Sure enough, it killed the plant with its nest, the eggs hatching, the chicks going all over the leaves and the flowers. We could do nothing but watch the lily die, its end hastened with the onset of summer evaporating the water in just those very spots where we'd planted the lily. 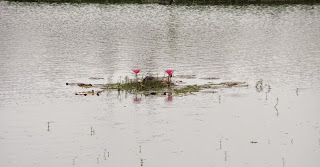 Monsoon began. The rains are still not as much as last year but the level has improved and two clusters of water lily sprouted near the viewing deck. Hmm.. We didn't remember planting any there but perhaps we were wrong. We waited for the familiar pink flower. Today it bloomed and what do you know? The flower is not pink in colour but white! 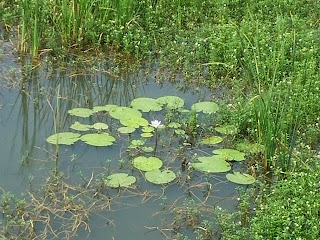 Posted by PNLIT Admin (Arathi) at 9:57 PM No comments:

TOI looks at 15 ideas from Karnataka that it believes have "freshness, innovation, the ability to be scaled and replicated, and potential impact".
Happy to see Save Bangalore Lakes Trust and the lakes movement as one of the 15 recognised ideas. And noteworthy that PNLIT/ Puttenahalli Lake finds mention in two places. The epaper can be seen here.

PNLIT and Puttenahalli Lake are surviving because of your support. In case you have not yet contributed to PNLIT's donation drive, details are below. Let us work together to make this "idea" a truly sustaining one.

**********
PNLIT's annual expenses are approximately Rs 6 lakhs. The trust account is audited and income tax returns since inception have been filed. For information on PNLIT's MoU with BBMP, please see here.
Donations may be made in cash, cheque or by direct remittance. Donations are eligible for income tax exemption, u/s 80G of the Income Tax Act (50% deduction from taxable income).

Donations in cash or cheque (in favour of "PNLIT") may be given to any of the PNLIT trustees.
Details for direct remittance -
Branch name: State Bank of India, RBI Layout, Bangalore 560078
Savings Account no: 31209228099 in the name of "PNLIT" or "Puttenahalli Neighbourhood Lake Improvement Trust"
MICR Code: 560002090
IFSC Code: SBIN0004408

What a truly delightful evening it was on the 9th, celebrating the magic of monsoon with some 30 children!

The 20 member team from Snehadhara Foundation (SF) led by Geetu had come well in advance to welcome the children. Despite the fact that only 4 or 5 kids had arrived on time, we began the event at the scheduled time of 5 p.m. The late-comers missed the warming up and sing along. Adult and child alike sat on the floor of the Gazebo and introductions began with each participant adding an "O" or "Aa" to their names.

Geetu dramatized the Search for a Rain Woman, her equally talented team members adding sound effects and prompting the shy ones to open up and mimic the falling of the rain drops and gurgling of the water flowing as a stream. More children came running followed by their parents. They joined the "train" that went hopping and skipping to the Viewing Deck for the next part of the event - giving free rein to their imagination through art.

The team members got the children in sit in one of the four designated places along the walking track that curved around the deck. Volunteers handed out sheets of white paper and crayons and the kids were invited to unleash their creativity. The Quick to Begin and Slow to Start were soon deeply involved in their artistic efforts. They didn't see the birds in the lake behind or hear the call of the Common Coot. (If they, and you, would like to hear please click on https://www.youtube.com/watch?v=6AvfgmUuxT0). 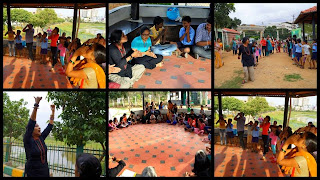 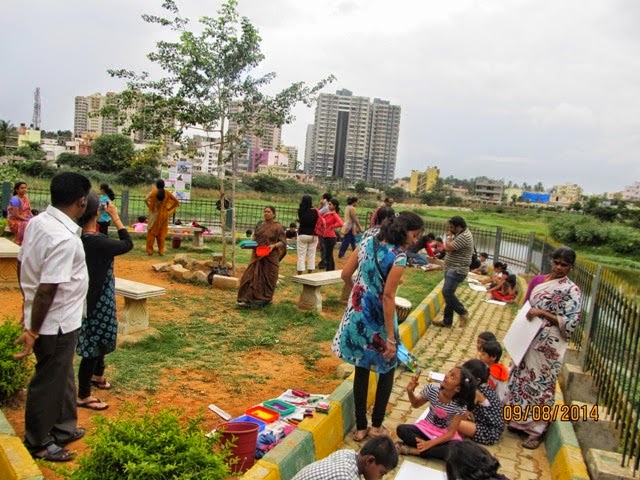 The children and we, trustees, were so caught up with the excitement that we lost track of time but not the SF team! By 6.15 p.m., the "train" was ready to return to the Gazebo, this time waving their sketches triumphantly over their heads. Some children who joined very late were still at work with a few team members keeping an eye on them. Geetu wrapped up the delightful evening and everyone dispersed though clearly loathe to leave! Chin up, folks! The next event is round the corner, on 7th Sept!

On a personal note, I have a request and a regret:
Request - please bring your children on time so that they don't miss any of the fun. This will also teach them the value of punctuality.

Regret - with so many children living in our residential complexes close to the lake and whose parents have been informed repeatedly through emails, the attendance was still very poor. No entry fee, art material distributed free of cost, talented story tellers, clean environment, loads of teaching through fun and yet the majority of our kids missed it all. Unfortunate indeed!

You can see more photographs here and here.

Posted by PNLIT Admin (Arathi) at 6:12 PM No comments:

Lizards at the lake

Many of us have an unfounded fear of lizards and we will not go out of our way to see one but do take a look at the photographs of a beautiful Peninsular Rock Agama sent by Joiston Pereira, a visitor to the lake. Do show them to your children!

Visit the lake yourself and see if you can spot one. Be brave. It is not poisonous but could bite if you attack it! :-) 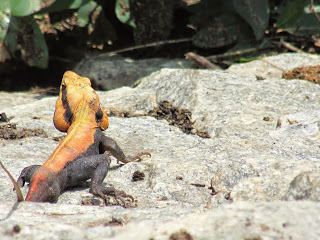 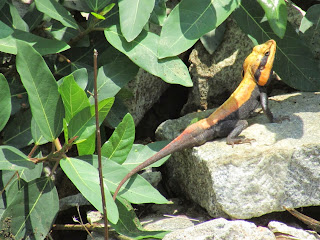 Posted by PNLIT Admin (Arathi) at 3:41 PM No comments:

PNLIT continues to maintain Puttenahalli Lake with support from all of you in terms of donations and volunteering. We are happy to tell you that we have recently renewed our MoU with the BBMP to maintain Puttenahalli Lake for another term of three years (upto 2017).
Over the last three years, the lake has been transformed into a place that the young and old use for relaxation, jogging and walking. With trees and plants of different varieties, many blooming with flowers, and birds of various species, people who have an interest and a passion for these are drawn to the lake.
Many of you and your children have participated in events conducted at the lake. We urge you to continue to use the place and ask your friends also to do so.
As per the MOU, the trust needs to do routine maintenance by nurturing the plants, keeping the place neat and tidy, repairs, etc. We need to incur expenditure on the gardeners and other staff, maintenance consumables and the like. Overhead expenditure is minimal. Our annual expenses are approximately Rs 6 lakhs.
We need your support  through your generous donations to cover this years fund requirement. The trust account is audited and income tax returns since inception have been filed. Please visit our web site http://www.puttenahallilake.in.
Please free to call us for further information.
Donations may be made in cash, cheque or by direct remittance. Donations are eligible for income tax exemption, u/s 80G of the Income Tax Act (50% deduction from taxable income)
Donations in cash or cheque (in favour of "PNLIT") may be given to any of the PNLIT trustees.
Details for direct remittance -
Branch name: State Bank of India, RBI Layout, Bangalore 560078
Savings Account no: 31209228099 in the name of "Puttenahalli Neighbourhood Lake Improvement Trust"
MICR Code: 560002090
IFSC Code: SBIN0004408

Posted by Arathi Manay at 10:54 PM No comments:

It surprises even us that from 2010 when rejuvenation of our Puttenahalli Lake began to now, the number of birds spotted in and around the lake exceeds well over 70! Only a few of these are resident, the others come and go as they will. Our task is to ensure a safe environment, inflow of only clean water, that the lake is well stocked with fish, to plant trees that give them fruit or can be used for nesting or perching.

Imagine seeing birds such as the endangered Woolly-necked Stork, Bay-backed Shrike, Asian Openbill Stork, the shy Jacanas (Pheasant tailed, Bronze), the migratory Garganey ducks and more in a little lake located between high rise buildings!! Each sighting gives us great pleasure which we want to share with everyone who comes to the lake (and those who don't - hence the Bird Watch mails!). You can also see them on our website here.

To facilitate identification of the several bird species, with the sponsorship of the Rotaract Club of Bangalore, a couple of years ago, we had installed huge boards at various points with photographs taken by our PNLIT Shutterbugs. Exposure to the elements had caused the boards to fade and we were looking to replace them. Farhana and Ritesh have come forward to help us out. Through their their reputed company Firefly Ink which offers large format digital printing, they got the boards reprinted and installed last Saturday. We took advantage of their generosity to get signs showing "Dos and Don'ts," "No Smoking," "Snake Alert," etc. made as well. 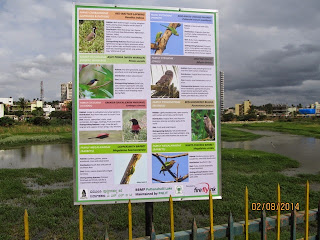 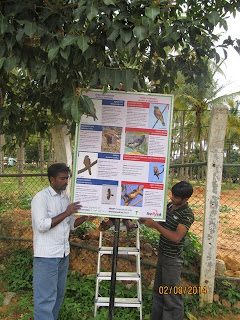 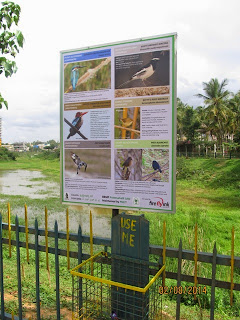 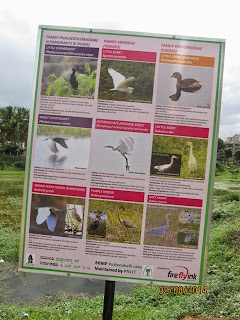 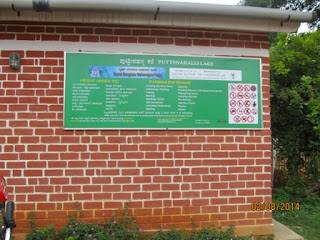 Heartfelt and many, many thanks to Farhana, Ritesh and to Firefly Ink.

If you would like to extend similar support to this unique avian bird habitat in our neighbourhood, please note that our fund donation drive is now on. Details regarding how to make a donation are given on this link - How you can Help.

If you'd like us to make a presentation to your CSR unit, we'll be happy to do so. Drop a mail <puttenahalli.lake@gmail.com>.

The monsoon is a love - hate season. You may hate the wetness, the puddles, the sniffling, the darkness of the skies, the difficulty in waking up but you can't deny that it is magical time with the cooing of the cuckoo, dancing of the peacock, crispy pakodas, hot chai ... the list is endless! 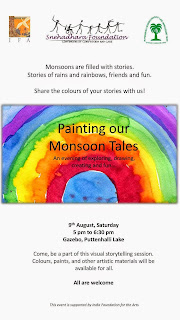 ​
Admission is open and free BUT we welcome your donations to PNLIT! Cheques in the name of "PNLIT" please! :-)

Children, parents, the young at heart - all are welcome.

Posted by Arathi Manay at 1:53 PM No comments: