"Bringing the community together" gardening session at the lake is back after the summer break!As you would know by now, the first Saturday of every month is open to you to exercise your green thumb; to introduce your children to gardening; to work together with your family; to destress; to discover the small pleasures of plants; to be one with nature, and more.  Make the most of your neighbourhood lake. Join us on this Saturday, 1st June between 9.30 a.m. and 11 a.m. for the Family Fun Gardening Saturday.No registration required. Just come and enjoy nature!
Posted by Arathi Manay at 6:06 PM No comments:

Update on the Sewage Situation at Puttenahalli lake

For whatever reason, the sewage did not come in today since morning! Perhaps because it didn't rain? Lull before the storm? How much worse can it get? The fish are struggling and large numbers have been coming to the surface of the water because the dissolved oxygen is depleting quickly. A few have already died. 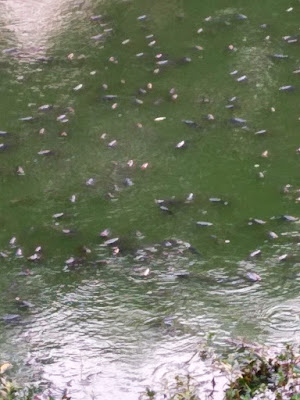 This continues to be very worrying situation. Our heart goes out to the BBMP workers who are clearing the grills of the silt traps and the muck in the wetland. 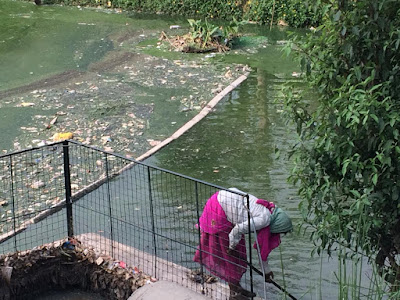 Photos by: Mr. G.R. Ravi (a regular walker at the lake), Sangita Agrawal (PNLIT trustee) and Ramu (gardener).
Posted by Arathi Manay at 6:02 PM No comments:

Sewage is killing our lake

Ever since March 2018 sewage has been entering our Puttenahalli Puttakere from two places, one from the underground drain in Nataraja layout and the other from an unknown source in the southern side. It had led to a massive fish kill (read about it here). We immediately alerted the BWSSB and informed the Fisheries Dept and the BBMP (Lakes).

Then and subsequently, the BWSSB local office would get a jetting machine to remove the blockage in the drain at Nataraja layout but were unable to trace the source of the sewage from the south east side. We escalated the issue and, in June 2018, met the three top officials at the BWSSB - the Chairman, Engineer-in-Chief and the Chief Engineer, Waste Water Management (all of them have been CCed).  Nevertheless, sewage continued to flow into the wetland and seeped into the main body of the lake.

With the water steadily turning green, we installed a fountain last month. When the body is pumped with poison, how will a paracetamol help? 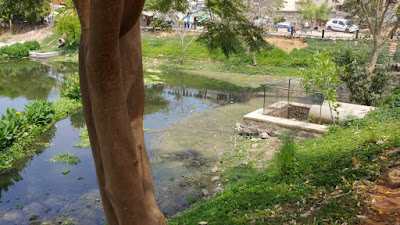 In desperation, we met the Chairman, Karnataka State Pollution Control Board, Mr. Jairam who fixed a meeting on 8th May with officials from the Jayanagar ward office of BWSSB. We were invited to attend as well. No one from BWSSB turned up for this meeting!

The rain over the past fortnight was heavy enough to break the wall of one of the silt traps in the wetland. Now all the plastic, paper and other solid waste come in as well. BBMP cannot rebuild the wall till the rain ceases. With the level increasing in the wetland and threatening to overflow, they tried to help by introducing Bokashi balls. We don't know how well this will work but with the sewage coming in as well, even a magic potion may well be useless.

Our lake is now full of sewage. All our work over the past nine years to nurture the lake have been completely undone - thanks to BWSSB. 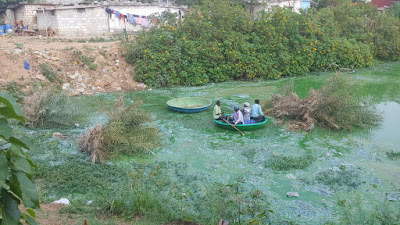 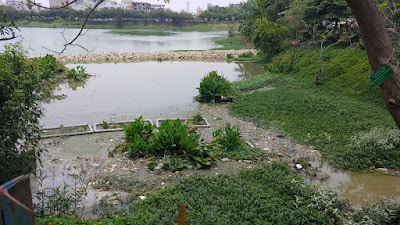 
We were this close to simply giving it all up but last week the BBMP (Lakes) sent workers to clean the wetland. Also, Mr. Mahendra from the regional office of KSPCB  brought Mr. Hemanth Kumar of BWSSB for a site inspection. Mr. Hemanth said they would lay a bigger drain pipe but that it would take time. How long? Who knows! Till then we have no alternative but to wait and watch the lake suffer, along with it all the fish and terrapins, not to mention the birds and other aquatic life forms.

We fervently hope the BWSSB will take serious note of the plight of our Puttakere and act swiftly at least now.
Posted by Arathi Manay at 5:54 PM No comments: