A Cloud of Trash @ Puttenahalli Lake

For the last seven years Pratham Books has been conducting 'One Day, One Story', an annual storytelling campaign that celebrates International Literacy Day on 8th September every year.
PNLIT has been part of this campaign for the last five years!

This year the selected book was A Cloud of Trash written by Karanjeet Kaur and illustrated by Bhavana Vipparthi. Theatre practitioner and filmmaker Surabhi Herur narrated and enacted this story much to the joy of 25 young children and their parents and grandparents who had assembled at the lake.

Here is what Ms. Vijayalakshmi Kutty, who attended the storytelling session, had to say:
Who doesn't like a good story? The young to the elderly love to hear a well-told tale. The story telling session had young children enraptured with a modern tale about an everyday problem - garbage. Recited with flair, vigour and vivacity, by theatre savvy, Surabhi Herur, the session had the children intellectually, emotionally and physically engaged at every stage, to explore an existential problem and together find solutions for it. A Cloud of Trash tells the story of a young girl with a burdensome cloud of garbage floating above her head at every moment. And that is the worrisome  story of our cities today which has to be told to our young ones. Surabhi brought the engaging session to a close with a collective,symbolic pledge to keep our environment clean.


Here are some moments captured beautifully by Vishnupriya Hathwar and Deepa Mohan. 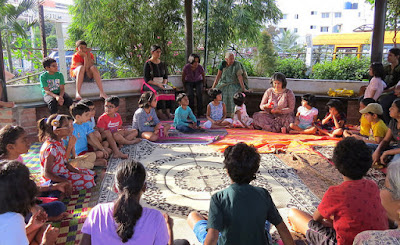 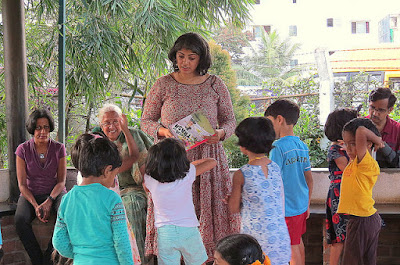 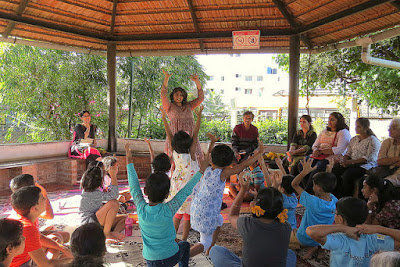 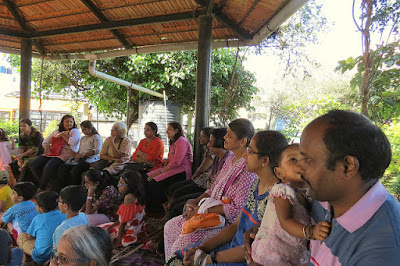 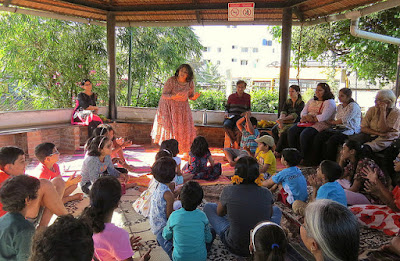 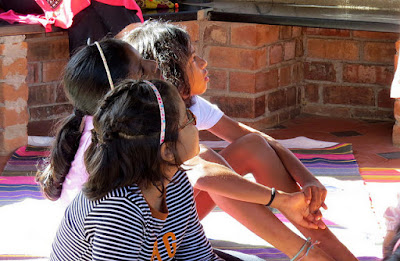 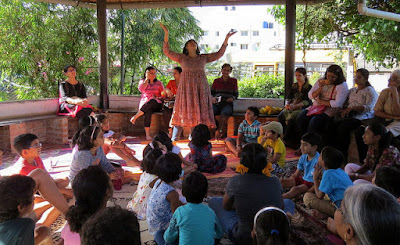 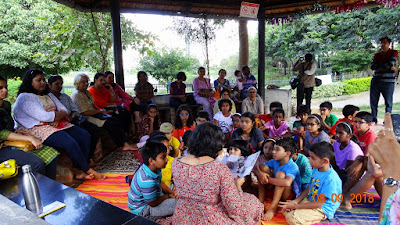 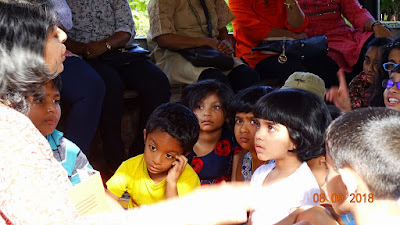 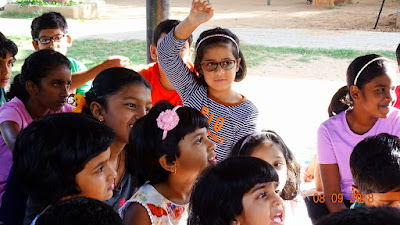 Thank you,
-Sapana
Posted by Arathi Manay at 4:50 PM No comments:

Workshops for parents facilitated by Vishnupriya Hathwar. All proceeds will go to Vishnupriya's organization The Humanity Express.

Details of the workshops 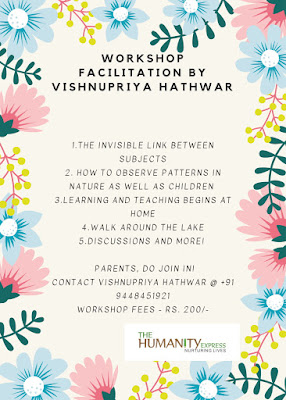 Posted by Arathi Manay at 10:35 AM No comments:

A bird in distress rescued at the lake

Some mornings begin with a bang. Today was one - literally with calls on two mobiles and the landline at the same time.

The news was bad. A  Great Cormorant was caught in a line or wire at the lake. It was dangling from its feet from the dead tree we'd planted as a perch. Where did this line/wire come from? This perch is the favourite of birds that are always landing and taking off. But this was no time to think of who did what and when. I called Seenappa, the gardener, who lived closest to the lake. He was on his way to his village. Between the other two gardeners, Jayanna lived closer but even that was too far away. I told him to come over anyway and requested the next caller to contact the slum residents on the lake bund and seek their help.

Nupur began to receive the distress calls as well. She ran to the lake while I stayed back coordinating with Jayanna and reassuring callers that help is on the way. 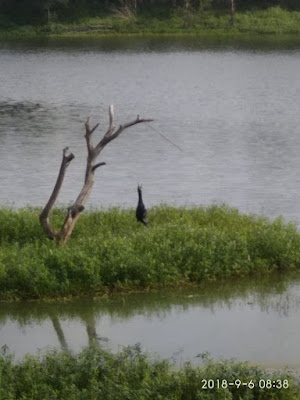 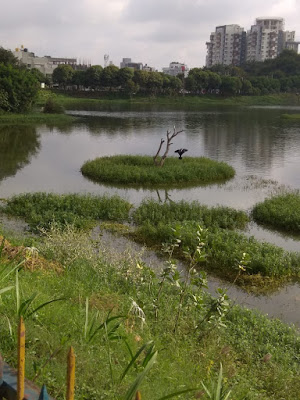 Finally, about 45 minutes later, one of the slum guys, Raju, brought the bird to the land and with two others, cut the nylon thread and freed it. The Great Cormorant flew down the slope, into the water and swam away.

It turned out that some boys had been caught fishing last Sat. While escaping, they had flung the line on the tree. The feet of the bird got entangled in the wire but it was lucky enough to escape the sharp curved hook. 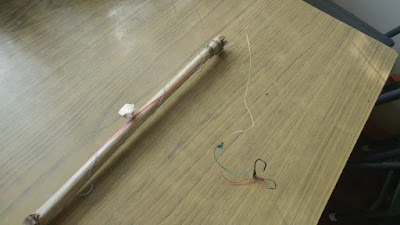 As terrible as this was, we were surprised and delighted at the number of calls we received. It showed the sensitivity of the callers, residents in the locality and regular walkers at the lake. Several of them waited till the bird was rescued. Our heartfelt thanks to all of them, to Raju and the two others who freed the bird. We do not want another bird ensnared but do hope the number of people who care for the lake increases!

Posted by Arathi Manay at 9:00 PM No comments:

The family gardening session was very productive this morning. Fourteen residents from the neighbourhood (7 children and 7 adults) deweeded the sidewalk area and sheared the hedges.Ritvik (Christ college student) did a great job in pruning the hedges uniformly for more than an hour and wanted to keep going beyond 11 a.m.! It felt wonderful to have a young adult like him contributing his Saturday morning to nature.Everyone enjoyed the bright morning watching Greater Cormorants (4 of them!) take off and land on the water. Guest appearances were made by a tiny snail, a skink, small beetles,spiders and other insects much to the delight of the little ones.Vishu (RVCE student) who has been volunteering with PNLIT since he was in 7th Standard delighted the little ones more with the close up shots of the Greater Cormorants taken on his DLSR camera.In our next Family Gardening Day (Oct 6th) hope to see more of you. 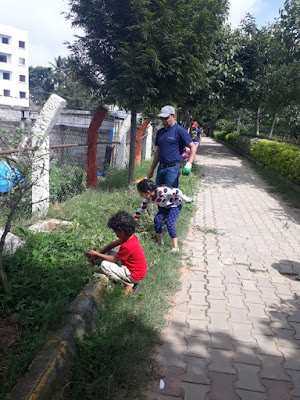 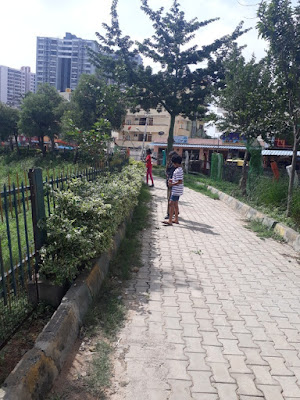 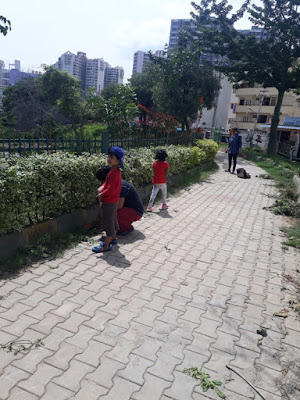 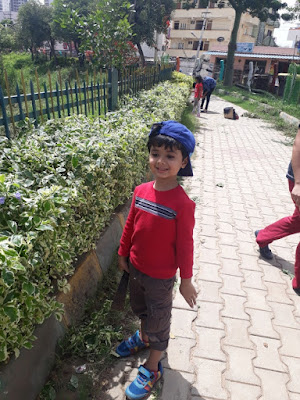 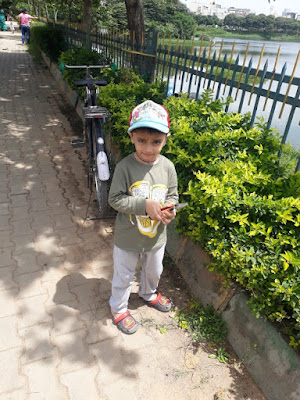 Posted by Arathi Manay at 3:35 PM No comments: