Have you booked your ticket to the Sudha Ragunathan concert on Feb. 25th? If you haven't, hurry! The sale of tickets is very brisk indeed. Don't miss this wonderful opportunity to listen to one of our most acclaimed Carnatic vocalists at MLR Convention Centre right next to the cause she's supporting - Puttenahalli Lake. 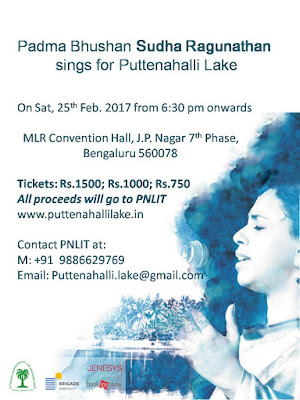 Sudha Ragunathan has very kindly offered PNLIT a few copies of her gorgeous coffee table book Sampurna Sruthi, Laya & My Life. This is a pictorial reflection on her musical journey, published by Audio Media Inc. and includes a CD on her thoughts and evolution as a singer. 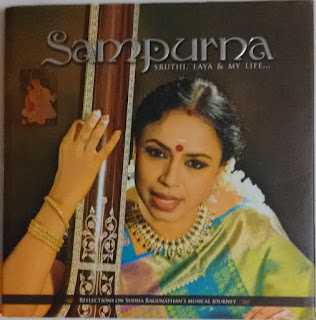 The cost of the book is Rs.1999. We have decided to share the proceeds equally with the Samudhaaya Foundation, set up by this philanthropic artist.

We will get only as many copies as are reserved in advance. If you'd like to get one of these limited edition books, please email puttenahalli.lake@gmail.com. You will own an autographed book to cherish and at the same time you will be helping both PNLIT and Samudhaaya Foundation. A blessing thrice over!

Posted by PNLIT Admin (Arathi) at 9:41 PM No comments:

Payment can be made by cash or online transfer.
For details on how to transfer, please see here.
If you are making an online payment, please send a screen shot of the transaction,your contact details along with your ticket requirements to: divyadshetty@hotmail.com / Whatsapp or sms Nupur 9886629769 to block your seats. 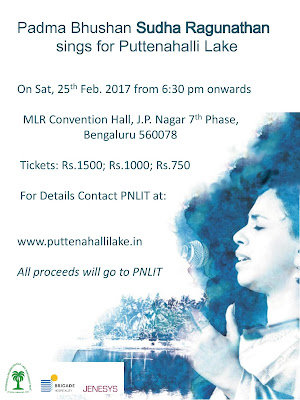 Posted by Arathi Manay at 11:30 AM No comments:

A Rosy Start to your morning

Rosy Starlings at the lake. Photo taken yesterday evening by Srinivas SK. The last time they were at the lake in such large numbers was in 2013. 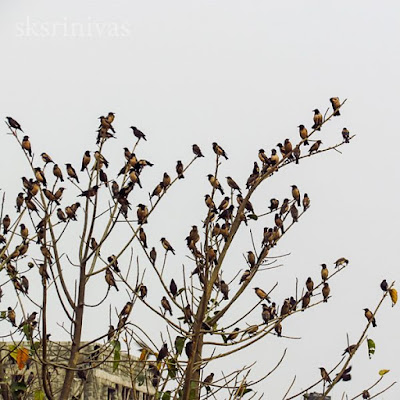 Posted by PNLIT Admin (Arathi) at 8:42 AM No comments:

First migratory birds of the season at our lake

See PNLIT volunteer and birder Madhurima's report on the first migratory birds at our lake.  In addition to the usual residents, she also spotted an Oriental Magpie Robin pair.


Feels so good to see the number of species increasing. Hopefully, both migrants and residents, will come in larger numbers and make the lake their home.

Here are some birds that we have at our lake, which come from across the borders.

Gray Wagtail: The species is widely distributed, with several populations breeding in Europe and Asia and migrating to tropical regions in Asia and Africa. (wiki)

Common Sandpiper: It breeds across most of temperate and subtropical Europe and Asia, and migrates to Africa, southern Asia and Australia in winter. (wiki)

Green Sandpiper: It breeds across subarctic Europe and Asia and is a migratory bird, wintering in southern Europe, the Indian Subcontinent, Southeast Asia, and tropical Africa. (wiki)

Wood Sandpiper: It breeds in subarctic wetlands from the Scottish Highlands across Europe and Asia. They migrate to Africa, Southern Asia, particularly India, and Australia. (wiki)

Brown Shrike: Several populations of this widespread species form distinctive subspecies which breed in temperate Asia and migrate to their winter quarters in tropical Asia.(wiki)

Blyth's Reed Warbler:  It breeds in temperate Asia and easternmost Europe. It is migratory, wintering in India and Sri Lanka. (wiki)

Posted by PNLIT Admin (Arathi) at 1:19 PM No comments: