Greetings to all on Karnataka Rajyotsava Day.

The continuous assault on hundreds of Bangalore’s famed lakes by vested interests prompted concerned citizens to raise the issue of our deteriorating water bodies with the state government, and the city administration. BBMP’s Lakes department lacked the funds and bandwidth to both rejuvenate lakes, and maintain them thereafter. The stress on the system was visible as rejuvenated lakes went back into various states of disrepair over time.

In 2009, the team under the leadership of Mr. B.V. Satish, then Chief Engineer, BBMP Lakes, took the extraordinarily progressive step of inviting neighbourhood residents  to participate in lake rejuvenation through discussions, and incorporating suggestions  from community representatives during rejuvenation. They then signed MoUs with these resident groups to maintain the rejuvenated lakes. Between 2011 and 2019, BBMP had signed MoUs with citizen-led, not-for-profit trusts such as PNLIT, MAPSAS, JaLaposhan and Iblur Environs Trust to maintain and nurture eight lakes in all. Under the stewardship of each group, these lakes began to thrive, becoming rich in biodiversity, and enhancing the quality of life of people in the neighborhood. With public interest mounting and leading to the formation of other groups, registered and informal, it seemed as if there was finally hope for the rest of the city’s lakes.

In 2020, based on a direction of the hon'ble High Court, against a WP 38401/2014 dated 04/03/2020 which read “... the State Government shall not execute any such MOU with any Corporate Entity”, BBMP stopped renewing MoUs with these citizen groups, even though the High Court explicitly forbade BBMP from engaging with corporate entities.

The court was unaware of the existing partnerships between BBMP and citizen groups for the upkeep of rejuvenated lakes, and BBMP did not seek the court’s permission to renew our MoUs.The citizen groups filed Interlocutory Applications on 29/06/2021 to the above-mentioned WP; these, however, have not been heard and admitted because of the elevation of the concerned Chief Justice to the Supreme Court of India.

To resolve this impasse, we met Mr Gaurav Gupta, Commissioner BBMP, and top officials from the BBMP Lakes department on 25th October 2021. He appreciated our contribution, and welcomed community participation, especially since we ensured continuity in lake upkeep even as officers within the BBMP were shifted constantly. However, till the hon’ble High Court resumes the hearings in WP 38401/2014, listens to our submissions and gives due directions, we have to remain ‘unofficial’ lake custodians. Even as BBMP struggles to resolve the issue of formal MoUs with citizen groups, we continue to oversee the upkeep of these precious water bodies. 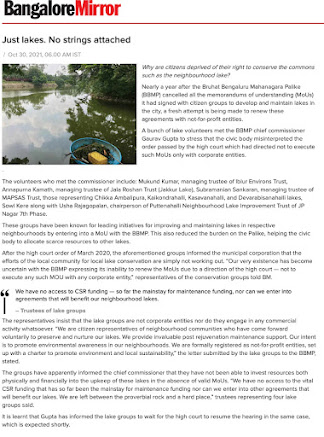 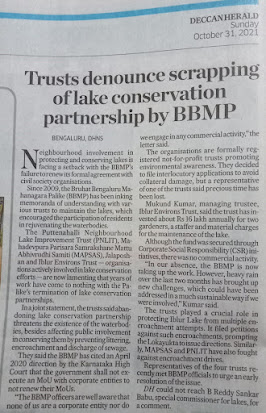 Posted by PNLIT Admin (Arathi) at 5:51 PM No comments: