We are delighted to tell you that PNLIT has been given Income Tax exemption under section 80G with a recognition certificate number of DIT(E)BLR/ 80G/ 63/ AABTP7792D/ ITO(E)-2/ Vol 2011 - 2012 dated 21/06/2011
As you are aware, the BBMP has handed over the maintenance of Puttenahalli Lake to us; the first ever citizens' group in Bangalore to be given such a responsibility. Our annual maintenance amount is estimated to be between Rs 5 lakhs to Rs. 6 lakhs. So far we have been able to manage with donations from individual well wishers but it has been a touch and go situation. We need to pay salaries to the gardener, the sweeper and the newly appointed security guard. In addition to individual donations, we are looking for corporate sponsors who have a budget for CSR. Please pass on any leads you may have so that we can pursue them. As per the MOU we have signed with BBMP, we are allowed to display the names of donors prominently at the lake.
With the demolition of the back wall of South City, unfortunate though it is, Puttenahalli lake is only a few steps away from South City. Many of you are hopefully going for a walk at the lake now and you can see for yourself how much work we and the BBMP have done to revive the lake. A lot more needs to be done. We need your help for this. Please donate generously and get tax exemption on your donation.
Many thanks.
Usha
Chairperson, PNLIT
Posted by Arathi Manay at 4:11 PM No comments:

11th Jun is PNLIT Founder's Day and what better way to celebrate it in 2011, than at the local Puttenahalli Government School, JP Nagar 7th Phase. The school, with Mr Chenna Basappa as Head Master, has 850-odd students in Std 1 to Std 10. The first batch of about 90 students is due to appear for the SSLC exam in April 2012. In addition, there is an Anganwadi that the younger children attend.

PNLIT, along with the staff of Puttenahalli Government School, organised a function to honour the children for academic achievement during 2010-11. Three children from each standard (Std 1 to Std 9 of 2010-11), received a 'goody bag' and a certificate from PNLIT, with the class toppers getting school bags, among other things. Other prizes included notebooks of different kinds, pens, pencils, erasers, sharpeners, pencil boxes, exam boards, lunch boxes, water bottles, games, books and other items. The best all-round performer received a wrist watch.

All the prizes (worth approximately Rs 35,000/-) were donated and sorted by residents of L&T South City and Brigade Millennium. Our appeal for contributions was so immense that we had enough to give each of the 850-odd children something noteworthy - at least a notebook, pencil and eraser. Some of the contributions are being given to the school for classroom interaction/ infrastructure and library use.

On behalf of Puttenahalli Government School and PNLIT, sincere thanks to all the donors for their generous contributions.

The smiles on the faces of the children said it all... THANK YOU for making it a memorable day!

Posted by Arathi Manay at 7:00 PM No comments:

Bird lovers will be interested to note that a large Purple Heron has been spotted at our lake. It most often can be seen sitting on the island. 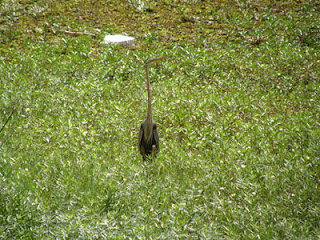