Eco-Ganesha kai hote? (What is Eco-Ganesha?) For sixty year old Savitri, who has lived all her life in a village in Maharashtra, the only Ganeshas she knows are the ones they make with the soil from the beds (and surroundings) of lakes and ponds in her village. Her first time in the city, Savitri is astounded by the size and the variety of Ganeshas she sees in the shops and Eco-Ganesha is a word that has got fixed in her memory forever.

Like many proud Marathas, Savitri says that the Ganesha festival itself originated during her ancestor Shivaji's time, or so her grandmother told her. She is happy that the festival is celebrated so grandly in the city, but little does she know that many city dwellers are trying to emulate her and her village mates today.

In Savitri's village, preparations for the festival begin several months earlier. During the summers, the water levels in the lakes fall and the local potters collect the soil from the lake beds. Though the impact of digging soil out from lake beds is debatable, when done in moderation, it is said improve the availability and quality of water and provide a better habitat for the water life (like the fishes and frogs) when the monsoon arrives. The Ganeshas are made in the summer months itself, naturally dried and then stored to be decorated shortly before the Ganapathi festival. The potters use their own dyes made with turmeric, red mud, plant and other natural colours. At the end of the festival, the Ganeshas go back into the lake waters from which they were born, cleansing and nourishing the water with the herbal properties of the decorated idols. Water to water.

Today, we are dissuading people from going to lakes with their Ganeshas.

There are several eco-friendly alternatives that have been advertised. The government has also been asking people to go in for mud and clay Ganeshas, painted with natural colours, of small size that can be immersed at home. Despite this, it is expected that majority of the Ganeshas will not be 'eco-compliant' and their worshippers will be seeking out lakes. The material with which the Ganeshas are made, the paints used to colour them and the other accessories that are put on the Ganeshas are most likely going to be harmful to water bodies and the lives they support.

Puttenahalli Lake is not on BBMP's list of lakes designated for Ganesha idol immersion.  "Immersion of idols" is also on the list of Don'ts. But we are prepared! PNLIT has organized two different immersion points where water drums and flower collection baskets have been specially placed. A watchman and volunteers will also be on duty. Devotees who do turn up at Puttenahalli Lake will be asked to immerse their Ganeshas in the water drums at these points and save the lake! 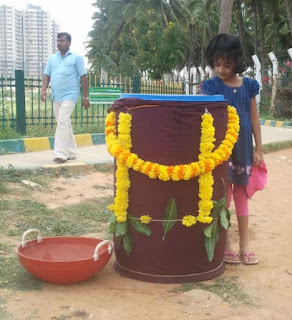 Pic: Nupur Jain
Posted by Arathi Manay at 1:20 AM