On 8th October 2015, a group of 34 volunteers from Cisco livened up Puttenahalli Lake with their good humored banter, comments and most of all, with their swift and efficient planting of saplings to form a protective hedge along the side of the walking track. This was done to prevent stray dogs from going down the embankment and chasing the birds away. By planting the saplings the Cisco volunteers saved a great deal of labour for us and our gardeners. By sending us the report below, they saved us the trouble of writing one as well! Sincere thanks to Cisco's Jagadeesh Maiya and Sudarshan Ganapathi, who led the volunteers and special thanks to Girisha Shankar for the report. - Usha (Trustee, PNLIT) 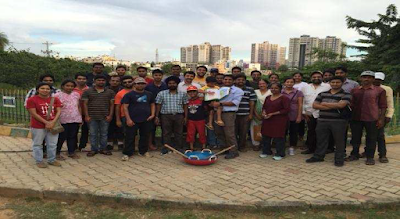 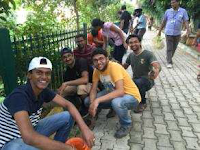 It was a sunny afternoon threatened by the evening rains. Thirty four (34) engineers from Cisco (where long-time PNLIT-donor Jagadeesh Maiya works) decided to spend the afternoon planting saplings by the walking track on the Puttenahalli lake shore. We all assembled around 2.30. Ms. Usha Rajagopalan, a trustee from Puttenahalli Neighbourhood Lake Improvement Trust gave us a brief overview of the lake and how it was restored. Her inspiring speech was all that we needed to get into the act. Teams were formed from the assembled group. Equipped with spears, pick-axe and shovels we set out. As one person dug the hole, the second one removed the plastic cover of the sapling, the third planted the sapling, the fourth watered the plant and off to the next one. A few volunteered to transport saplings and water for the small teams that were ahead. It was an example of multiprocessor, with pipelining!!! The recent rains helped by keeping the soil loose and easy to dig.

As the enthusiasm soared, the sleeping earthworms and beetles rushed out of their safe haven to see what was happening – scaring some of the engineers in the process. But were relocated safely without getting harmed. Some of us were lucky to spot some birds – such as white-breasted kingfisher. With all the saplings that we planted, may be we have increased the possibility of sighting more birds in this park in future.

The weather was helpful – by not raining. As many as 450+ saplings were planted by the team in the session. But soon, most of us, not accustomed to this kind of work, were
all tired. Sudarshan brought home made Puliyogare and Mamtha brought Ginger tea from Cisco campus. They were devoured by one and all in that park. Rejuvenated by the delicious food, digging/planting/watering continued till we planted all 700 saplings. 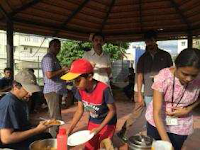 Our team got a boost when Junior Sudarshan (Sumukha), Junior Jagadeesh(s) (Sriram and Arjun) joined to lend their hands. The evening ended with an enthralling speech from Jagadeesh. With a few blisters in hand, yet with great satisfaction, we dispersed.

This is the beginning of continued volunteering. For ease of communication an internal alias (volunteers-pnlit) is being created with all the 34 volunteers included. The alias is open for more volunteers to register.