Celebrating Earth Day with a Fountain at Puttenahalli Lake (Puttakere)

Earth Day greetings. We began our celebration two days earlier with the inauguration of a fountain at our Puttenahalli Lake (Puttakere). However, till the jets of water whooshed into the air on the evening of 20th April, we were on tenterhooks.

If the truth be told, we had been on the edge from November 2018, ever since we applied for enhanced power. With PNLIT trustees Mr. Ramaswamy and Nupur Jain following up with Bescom and the electrical contractor, we finally managed to get the additional power. We had already placed the order for the fountain with Alpha Power, Coimbatore.

The vendor, Mr. Rajaniprakash, his men and the disassembled fountain reached late at night on 13th April. Our roller coaster ride continued till the evening of Wednesday 17th when the fountain was anchored and switched on. The central jet zoomed to a height of over 20 feet, the shorter ones to about 8 feet. What a gorgeous sight it was!

NOW we could celebrate Earth Day 2019 and felicitate Mr. B. V. Satish, Chief Engineer, BBMP (Lakes) on his retirement.

Two days and a morning is not a lot of time but by 2.30 p.m. on Saturday every single thing in our check list was ticked. That was when our Manager, Susheela called to say there had been no power since morning!  The local Bescom office said that maintenance work was going on but power would be restored shortly.

It did but our heebie-jeebies remained. What if the guests assemble and there's no power? The sky was darkening. What if it rained? Mr. Satish, one of the most punctual man ever, was held up in an important meeting.  Dr. Vaman Acharya, ex-Chairman, KSPCB who had been instrumental in facilitating feeding the lake with treated water called to say that he would like to attend if the event had not been postponed due to the rain.

Meanwhile, the gazebo was getting slowly filled with residents. Many others stood outside talking. Mr. Satish strode in briskly past 5 o'clock. When he heard Dr. Acharya was on his way, he went for a quick walk around the lake. By the time he returned, a light drizzle had started. We decided to proceed with the inauguration. A  quick welcome and an equally brief address by Mr. Satish and we trooped to the Viewing Deck. 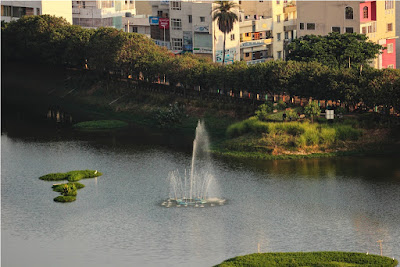 Our gardeners had spent the morning clearing the place with extra care and had decorated the switch panel with marigold flowers. Mr. Satish pushed the switch up and whoosh went the fountain making the gathering break into loud applause. Just then Dr. Acharya came as well - to our immense relief.

He was kind enough to share his thoughts with us, of the importance of the community to assist the government to protect lakes to safeguard our own future. This struck a chord not only with us but also with Anand Yadwad from Avalahalli Lake and Chaitanya and Subramanya from Talaghattapura Lake who had come to cheer us on our milestone - Fountain at Puttenahalli Puttakere.

This installation would not have been possible without fund support from our partner, Axis Bank. Our heartfelt thanks to Ms. Vandana Srikanta, Vice President and Branch Head and her colleague Ms. Megha Bhargava, Operations Head, Axis Bank, Jayanagar Branch for attending the event at such short notice. We also take this opportunity to thank Mr. Vinod Jain, electrical cable supplier. 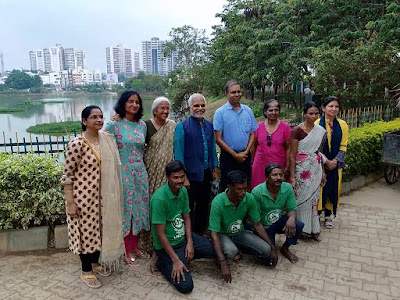 Trustees and staff with Dr Acharya and Mr Satish

Our deepest gratitude to Mr. Satish, Dr. Acharya, fellow "lakers," everyone who had attended the event and the many more who had sent their best wishes.

We have many plans to improve the lake and its surroundings. We look forward to your continued support.