It's customary to give the good news first but I will reserve them for the end. The bad news is that response to our fund drive is extremely disappointing. In three weeks our collection is only Rs. 75,000 as against a target of Rs. Ten Lakhs! We fervently hope that your generosity will resurface as the financial year comes to an end. Our optimism and drive have seen us overcome one challenge after another. Will we see through this? The answer lies with you, folks! Our Puttenahalli lake is in your hands.

Now for the good news, ever so many but here are the top ones!

1) The most important one is that BWSSB has diverted the sewage at Aradhana Layout. It no longer enters the lake!


2) After a see saw of "Will the slum dwellers allow BWSSB to replace the underground pipeline or will they stay the work?" BWSSB has got their act together it seems. They began by digging a chamber in the pathway yesterday and are in the process of concretizing it, as even as I write this. Were they spurred by a report in the Hindu dated 2nd March 2020? 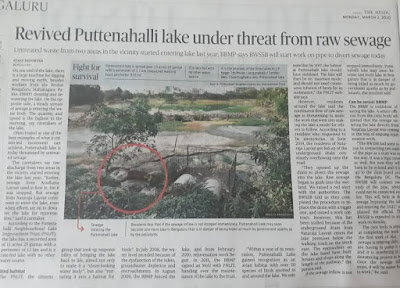 3) Two plants flowered for the first time and sparked off a debate between Nupur and me about which one is better! Her favourite is the Orange trumpet vine (Pyrostegia venusta) and mine is the Mickey Mouse Plant (Ochna serrulata). You can decide which of the two you prefer but psst.... mine got its name because the yellow petals fall off leaving the bright red sepals and fleshy black fruit to make it look just like, well, Mickey Mouse!


4) Talk of ganging up to face a common enemy! Two days ago, we heard commotion in the lake basin and saw two Purple swamphens highly agitated and flapping their wings. Our gardeners said a snake must be going to the nest for the birds' eggs. We couldn't see it because the weeds were tall but other birds rushed to the spot and joined the parent birds to drive the snake away. The allies included another swamphen, three Eurasian coots, two Bronze-winged Jacanas, a Red-wattled lapwing and a White breasted waterhen. The Jacanas and the waterhen are particularly shy birds who scoot from the sight of people and here they were rallying around! They collectively brought the snake into the open. What a very long watersnake it was! And yet, it was no match for the birds. They sent it packing beyond the island and then the parent birds went back to their nest while their friends dispersed. It was truly a magnificent show of strength in numbers.

Do you want to know how you can rally around to help our lake and its denizens? Click on  http://www.puttenahallilake.in/how-to-donate