Cutting a friend to size

Whether a human being or a tree, how little we value the aged never realizing the good in them. Just outside our Puttenahalli Lake is a tall tree which had leaves growing on branches too high up to identify what species it belonged to. The branch formation gave no clue either. Perhaps it was deciduous because sometimes only the twigs remained criss-crossing in interesting formations against the sky. Ever since PNLIT assumed charge of maintaining the lake, we noticed the fellow looming outside the lake because, come evening, flocks of birds like Rosy Pastors would fly from the lake and sit on its branches. After a while they would fly away unlike the Barbets, Woodpeckers, Grey headed Mynas, Parakeets and Shikra among others that nested or fed off the old tree. Our PNLIT Shutterbugs spent as much time clicking the birds as they did the water birds. Photographs can be seen on our website.
Birds on the "dead" tree 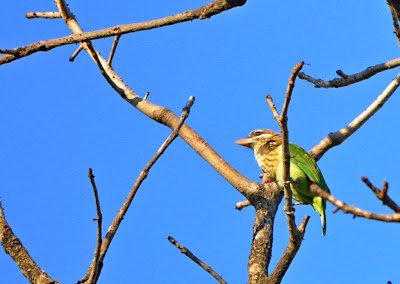 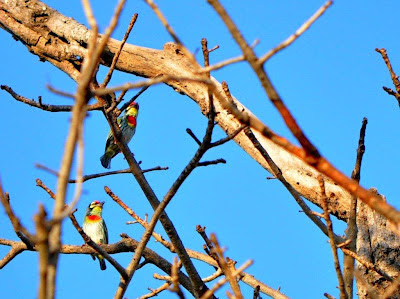 Today at about 1.30 p.m., one of our volunteers driving past noticed some men cutting down the tree. She alerted us and we rang up our gardener to find out who was cutting it down while we tried to contact the BBMP. One of the men called back to ask if the tree was to be cut down or left standing. We told him firmly not to chop it and rushed to the site. Just as we reached the spot, however, it came crashing down. Apparently, the men had instructions from the Forest Dept. to cut down dead trees in order to prevent them from falling on people and vehicles. A very valid reason indeed except that our tree would not have been a threat to anyone. It stood by the roadside but generations of tree cutters had lopped off all the branches that would have hung over the road. Behind the tree was a steep slope with a profusion of weeds and no building anywhere near. Where was the danger of anyone getting hurt? Without considering these, the men sliced it with an electric saw. In one swift stroke, they have driven all the birds to seek another resting place, another food source in an increasingly hostile city. 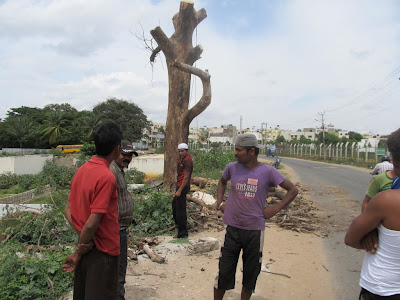 Shouldn't the Forest Department identify the ones that could pose a threat and leave the others alone? Shouldn't they know that even a "dead" tree supports a large number of life forms? Seshadri, the man who led the cutters team, dismissed any suggestion of birds nesting in the tree. He reported to his superior officer in the Forest Dept. Mr. Vijay Kumar, that we were getting agitated for nothing, that there were no nests in the tree, only a few holes!

Last Saturday we met a bird watcher at the lake who narrated how one particular hole in a dead tree became the home of three bird species one after another - a White Cheeked Barbet, a Parakeet and an Owlet. This is not unusual. Birds do not always build nests with twigs and leaves. They also drill holes or move into existing ones. The Indian Environment Portal says that " In India, 120 species of tree-cavity nesting birds have been identified but very little information is available about their breeding habits." The portal also says, "About 10% of the world's bird species are on the verge of extinction, threatened by trapping and tree felling." 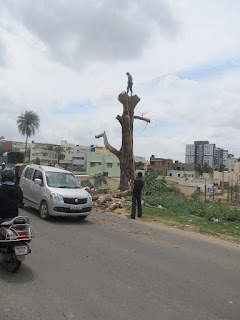 Early last month the Chief Conservator of Forests, Mr. Brijesh Kumar had visited the lake and we had pointed out the tree to him asking if we could officially adopt it. He had laughed and said, "Unfortunately, we are not approached for permission to cut down a dead tree." How we wish we had followed it up with him and found if somehow or the other we could adopt the tree. Would a ring of green paint around the trunk have protected it from the killing bite of an electric saw? We could not save the branches but, on our insistence, Seshadri and his men have left the trunk alone. Will it become a home to any bird? If another team of ignorant do-gooders hold back their saw, time will tell.

Quite saddening to know. That old tree seemed to look over the lake smilingly.