A meeting of lake teams in Bangalore was organised by Arekere Neighbourhood Improvement Trust (ANIT) together with OneBengaluru on 5th Aug 2012. 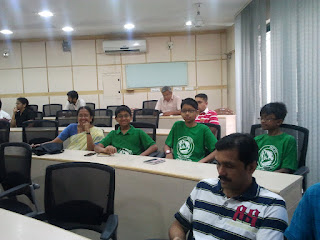 Directly after the meeting, a team of some 10 people from Kaggadasapura Lake in East Bangalore visited Puttenahalli Lake. They are keen on leveraging our experiences at Puttenahalli Lake to conserve their neighbourhood lake.

Below is a report of the meeting by Dr Arbind Gupta, chairperson of ANIT.
Report in The Times of India "City lakes are your responsibility" here.

The chief guests were

Dr Arbind Kumar Gupta, chairperson ANIT, set the agenda of the meeting by giving a background of how the idea for bringing different lake teams came about. He also spoke about the concept of NEW INDIA as an enlightened group of citizens who do not remain a bystander but choose to become a stake holder by taking part in finding solutions to these problems.

Dr Ashwin Mahesh highlighted the need for citizens to participate in public problem solving and begin with small activities. He talked about how each small activity of collecting / documenting lake info by public can help in evolving a solution and build the infrastructure and setup required to solve the problem. Later on, he also spoke about the idea of creating a platform, a good part of which is available in bcity.com that can be leveraged for this purpose.

Dr Ravi Ralph talked about the various challenges faced by different lakes in the city. He was very clear that encroachment of lakes and destruction of catchment areas of lakes is causing havoc to the health and conditions of lake. He also talked about the roles and responsibility of LDA in Bangalore as an approving, monitoring and supervising agency, while the actual responsibility of lake development lies with BBMP and BDA. He highlighted the heavy contamination of lakes that cannot support even aquatic life.

Mr Mukunda brought out two key points about the development of lakes. First is to know the topological structure of lakes that provides for natural connectivity of water flow between lakes. He requested different lake teams to walk around the path of upstream and downstream lakes and collect this information. He was also of the opinion that the only solution for maintaining lakes was to vest this responsibility with Govt agencies, in partnership with lake teams. He brought out the difficulty in sustaining lake maintenance if this is to be done by local residents only. He said that lakes are the only solutions to water problem of Bangalore and it can help bring ground water to within 200ft.

Mr Somesh also shared about the plan of development of lakes in South Bangalore and he talked about various steps being taken by BDA in this direction. It was suggested that providing information about various responsibility about lake upkeep will help local residents in supporting Govt agencies.


Notice of the meeting here.
Posted by Arathi Manay at 10:14 AM