Bonding over gardening at Puttenahalli Lake

We have been inviting you to bring your family along for "weekend gardening" at the lake. Some of the volunteers this past weekend did just that!

Our regular volunteers Mithilesh and Chandrika, a young couple from 24th Main came with the former's mother and sister. Balakrishnan and his 10 year old son Girish; Regu and youngster Sanjay from Brigade Millennium, Shubha, son Sharad and daughter Ashraya from South City, Nagalakshmi and nephew Gautham from Puttenahalli joined other individual volunteers and together did a lot of work at the lake last Saturday and Sunday.

The tone was set on Saturday early morning with a little girl and her father,  visitors to the lake, sitting on a bench and watching Chandrika at work outside the Security Cabin. Chandrika called the five year old over and taught her the basics - which end of the cutting must go under the ground and how to press the soil around the new plant, etc. The child was delighted and wanted to join her new tutor and other volunteers but they were headed to the trickier place within the inner grill. 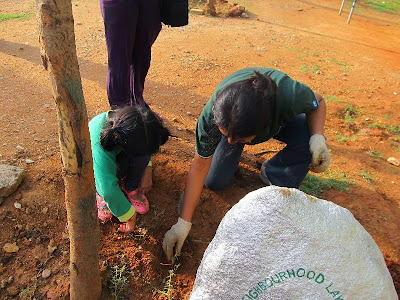 The rain may be sparse in our part of the city but the drizzle is enough for the weeds to grow lush. The Ixoras, Tecomas, Plumbagos and Murayas planted within the inner grill are completely swamped by weeds. In just over an hour, however, a number of them were freed and given their rightful places in the sun. See the before and after pix below. 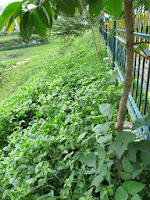 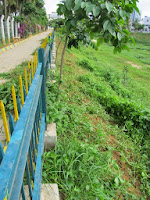 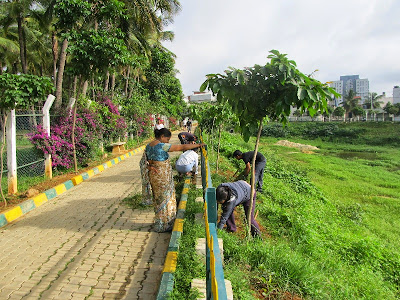 On Day Two the location shifted to the garden near the Gazebo. Once again there was no mistaking the strengthening of family ties. Shubha taught 7 year old Ashraya how to pluck out the weed along with the root. Her son Sharad was  busy plying the wheelbarrow loaded with Parthenium which he had helped to uproot. 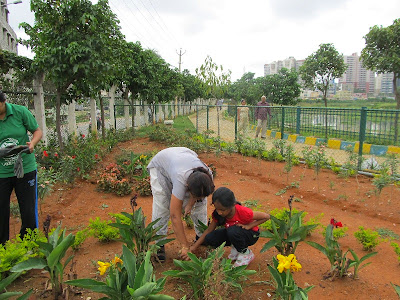 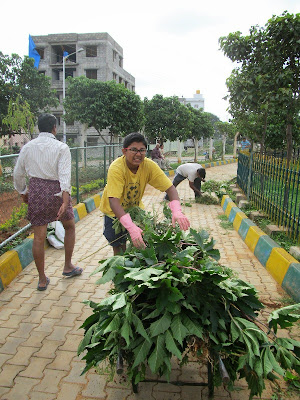 Girish a 10 year old who visits his aunt Nagalakshmi every weekend was watching her closely as she showed him how to clear the soil around the base of a plant and raise a small ridge to retain water. It turned out that her family once had a nursery at Jayanagar 4th Block. She has a wealth of native knowledge about the medicinal properties of several plants that she was happy to share with us as much as with her nephew. 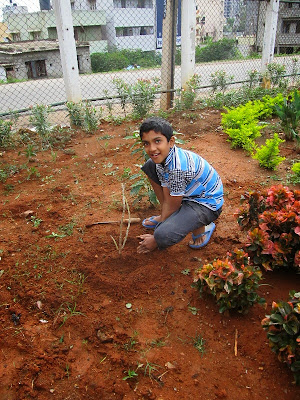 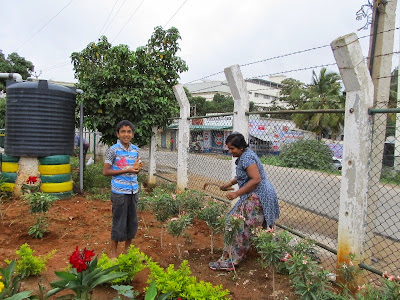 Gautham and his aunt

And to think that we had been worried about both our gardeners taking a fortnight off at the same time!