A dry for years lake finally looks like a proper water body. Ever since we took up the cause of Puttenahalli Lake over seven years ago, this had been one of our goals - to see the entire  lake bed submerged. After a heavy downpour the previous evening, we saw just this. A marvellous sight on on World Environment Day, Sunday 5th June. From one end to the other, from this side to that, there's water, water everywhere at Puttenahalli Lake! 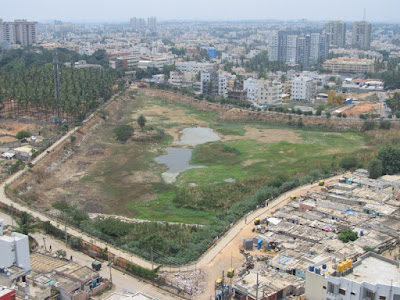 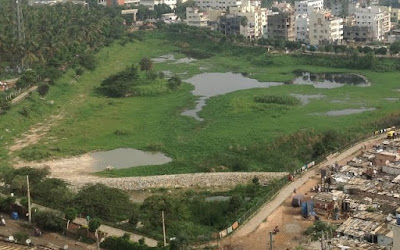 For over a year, excess treated waste water from the STP at South City Apartment Complex is being discharged into the lake. This has percolated and saturated thoroughly the earth below before showing up on the surface. The rain water added to this increasing the level to an unprecedented height.

While we were taking it all in, total strangers came up to us and expressed their delight. We were elated but what ran in our heads was a new concern, a new challenge - how do we keep the water clean?

We need to pluck out new shoots of the the alligator weed from the water. Remove at once the plastic bags of Puja offerings and bottles that the insensitive manage to fling over the grill before our guys can stop them.  Yellappa, the fisherman, we had engaged to remove the invasive weeds in April is unable to get workers willing to work in the cold water. By the time the water warms up, would the weeds have grown wild once again? Or will the fish that are thriving, indeed jumping in and out of the water merrily, eat the young shoots quickly enough?


The rain did not only fill the lake. It also dissolved the nutrients in the water. Unfortunately, on 27th May a sewage chamber on Nataraja Layout had collapsed and the contents had gone straight into the lake gathering along the way all the plastic and trash in the drain. Fortunately, they were contained within the wetland. We had contacted BWSSB immediately and JE Mr. Nagaraj attended to it. By the time he got it repaired, however, sewage had been flooding the wetland for four days and nights. We hoped that the heavy rains over the next few days would dilute the sewage and reduce the damage it can do to the quality of the water. But with the increased level the trash floated higher and higher. The boulders forming the wetland is about seven feet high but now at some points it is less than half a foot above the water.


To make matters worse, the sewage chamber collapsed once again on the night of 5th June! The heavy traffic had not allowed the fresh cement on the new manhole to cure properly. People had removed the obstacles placed on the road and gone over the manhole cover breaking it. As if this is not enough, according to BWSSB Nagaraj, people living on either side of the road diverted the rain water from their homes into the sewage line adding to the load. He got it repaired yet again but this time we were wiser. One of our well wishers, Srinivas Alavilli spoke to the Hulimavu traffic police and got a man posted to divert traffic, With this, we hope that we have solved at least one problem, for the present.

Now to tackle the danger of the muck flowing over the stones of the wetland into the main lake which we had got cleaned in April with such difficulty. BWSSB was unable to get workers at such short notice. Nor could BBMP. Our two gardeners came to the rescue. Together with the BBMP contractor's man assigned to our lake, Jayanna and Ramu entered the stinky cesspool in a coracle and using long handled rakes pushed the floating garbage to a side from where they brought it out of the water. We paid them for this of course but it was hardly any compensation for the relief it gave us. We'd managed to prevent the bulk of the plastic waste from polluting the lake. Truly, with success comes greater responsibility. 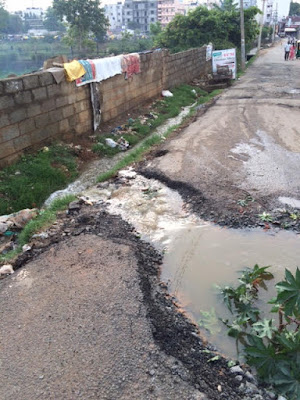 Sewage overflowing on the road 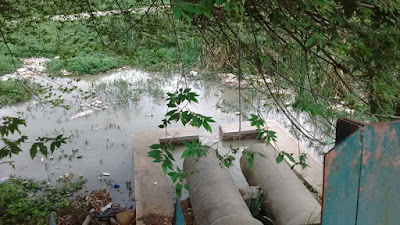 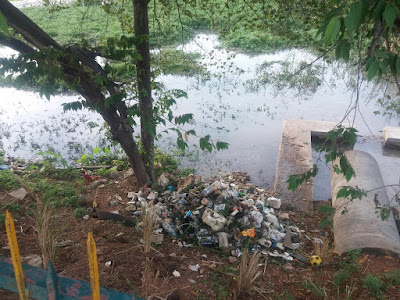 In our lake chronicles, this is the "low" of having water in the lake. Look out for the exciting "highs" soon to follow!