About the International Literacy Day celebration

In a village called Adhania lives little Munia who cannot play like other children because she has a limp. She plays instead with the Elephant Bird who cannot fly. One day Vayu, the horse, disappears and the villagers blame the Elephant Bird for its disappearance. Well, the Elephant Bird is big enough to swallow a horse but did he swallow Vayu? Munia doesn't think so. She sets out to prove her friend's innocence.

This story written by Arefa Tehsin, illustrated by Sonal Goyal and Sumit Sakhuja was the book chosen by Pratham Books for their  'One Day One Story'  campaign as part of the International Literacy Day.

We used this opportunity to revive our story telling at the lake on Saturday 17th September. Are we happy we did! The children came in ones and twos and groups and soon the Gazebo was full of kids! A rough count showed about 65 young heads, the highest number ever for a story telling at our lake. Many of them had parents and/or grandparents with them. Some of the adults occupied the benches in the Gazebo, most of them stood outside. Their keen attention to the story telling was evident when they along with the children imitated the gestures of the story tellers! 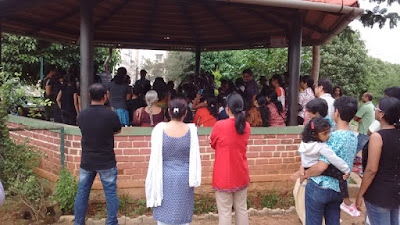 Inside and outside the gazebo 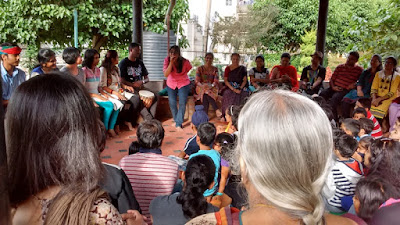 Breathing life into the story 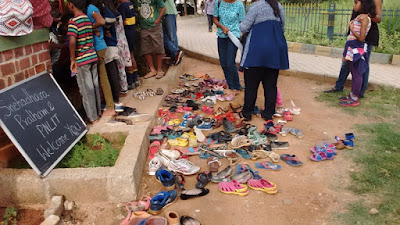 The colours on our feet!

Snehadhara has a strong team of such talented story tellers who were enthused by the engrossed listeners, young and old. They brought the curious and brave Munia, the magical Elephant Bird and the suspicious villagers to life. The story ended but not the fun.

Geetu and her team brought the kids to the open ground, got them to form a huge circle and everybody together played a couple of games. Then it was time to say good bye and disperse but very many of the children didn't want to leave! We didn't want them to leave either so we'll very soon organize another exciting event at the lake. Watch this space for the announcement! 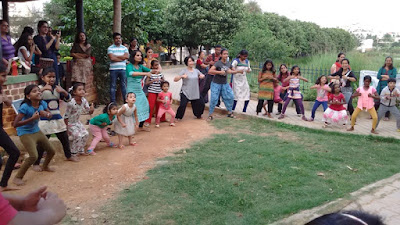 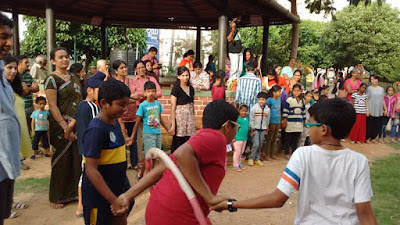 Coming back to The Elephant Bird - the story may be fantasy but Elephant Birds did exist long ago in Madagascar. Read about them on wiki here.

Usha
for PNLIT with Snehadhara Foundation and Pratham Books

More photographs can be seen here.
Posted by PNLIT Admin (Arathi) at 7:17 PM