Origami workshop conducted at the lake

As part of our effort to introduce children in our neighbourhood to different kinds of arts and skills, we had organized an Origami workshop at the lake on 23rd October 2016.

Origami, as Sapana Rawat, resident of South City and a PNLIT volunteer explains below, is the delicate art of paper folding. Mr. Ravi Acharya who's been practising this art for over 25 years or more conducted the first workshop for 15 children at the lake. A report by Sapana is below. Some photos taken by Nidhi Chawla can be seen here. 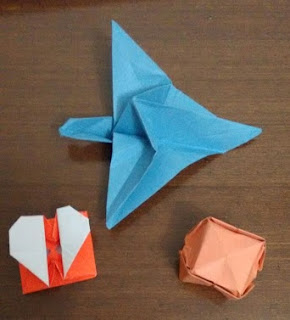 Origami items made by children at the workshop

If you'd like your child to learn from Mr. Acharya, please email

On a bright sunny Sunday morning at 11 a.m., we had 15 children from age 8 yrs to 11 yrs join Shri Ravi Acharya for an Origami session at the gazebo of our beautiful Puttenahalli Lake.Ravi Acharya,   a smiling 70-year old Origami artist, gave out origami paper to the children while showing various Origami items- birds, flowers, baskets, table, boxes of various shapes and sizes- that children could make with him. All the children (and the adult PNLIT volunteers and trustees!) got excited seeing the flapping bird, so off we started with it only to realise in 3 folds that this is going to be a hard one to make.Acharyaji very patiently worked with each child showing how to fold and crease the paper neatly. A couple of older children got the hang of folding very easily and were happy to finish their art work ahead of the younger ones. The younger ones with sad faces saying -"I don't know how to do this" were lovingly helped by the teacher. The older children also joined in helping the younger ones -showing off what they have learned but also guiding the little ones. It was heartening to see the children helping each other out.After the challenging flapping bird, everyone wanted a simple, easy-to-make item! So a heart-shaped message box was selected, which did turn out to be simple. The children managed to finish making it by themselves with some help here and there. By now it was more than hour since we started but the children wanted to do one last item. Again everyone wanted something simple but different, so we voted for a table, and like the bird, this too turned out to be a tough one to make. Surprisingly, no one gave up and Acharyaji helped each child to finish the table. This tiny table created a with a small square of paper can hold 2-3 cell phones easily. Yes, this was tested by the children once they finished their tables! At the end of the session, origami papers were given to the children to take home and practice the same or other items. After almost two hours of Origami, the happy and hungry children (and adults) went home to eat and try their folds and creases all over again.About the art and the artist------------------------------------------Origami is an art of paper folding. Ori means "folding", and kami means "paper". Origami traces its origins to the Japanese who are supposed to have invented this art soon after was paper brought to Japan by the Chinese around the 6th century AD. Though the origin of Origami is Japanese, of late, it is used to include all kinds of paper folding.Ravi Acharya was introduced to Origami in the early 1980s. Since then he has been fascinated by birds, flowers and boxes which he creates using different colours of paper. Origami has been a stress buster for him and now, after his retirement he loves teaching and spreading love for this art .