We've had and will continue to have, diverse events at the lake to bring the neighbourhood together. The Nrityotsav on 5th November, held in collaboration with Nritya Darpan and IPAAC, was unique for more than one reason.

This was not only our first formal dance programme but also that it took place on a stage specially set up, with the water in the background and birds flying overhead. Also the first time in terms of the number of artists (90?) from little ones aged 7 (I guess) to shall I dare say, 45 years? The dancers were accompanied by their relatives and friends so the crowd was different too. Most of them were visiting the lake for the first time.

Another first was that we had any Chief Guest at all. We had two  - Ms. Malavika Avinash, the renowned Kannada actress and Mr. Ganesh Reddy, Founder of Stayfit Health and Fitness World Pvt. Ltd.

Both of them were as amazed as the gathering was at the pristine lake, the lush trees and clean surrounding.  Invited to speak, Ms. Avinash began by saying that with such heavy rains, instead of asking people where they live, she's tempted to ask in which lake they live. "We have demolished rajakaluves," she  said. "Constructed buildings over storm water drains, and now with the rains, we complain of water gushing into our homes. We need to protect water whether it be a pond or a lake." 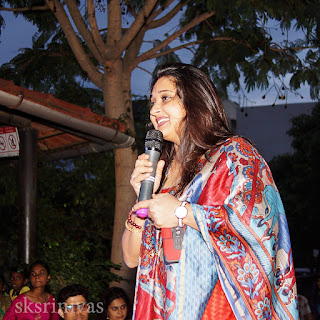 She remembered the Puttenahalli Lake being much bigger than what it is now but in the same breath she complimented PNLIT for preventing it from shrinking further. She lauded the neighbourhood for supporting PNLIT in nurturing the lake.

The usual venue for a cultural programme is an auditorium, she said. Holding the dance programme at the lake made it special. It has become a place for the community to gather. This is much needed especially in a city like ours where common spaces are shrinking. The singing and dancing by students from Nritya Darpan were an apt tribute to the lake and indeed to our rich culture and land she said to huge applause from the audience.

Given the occasion, celebration of Karnataka Rajyotsava, the evening began with young girls and boys singing the state anthem, "Jaya Bharata Jananiya Tanujate." The songs and dances that followed in quick succession were interspersed with short recorded commentaries on the best of Bengaluru and how to make it even better.

The dancers, even the young ones, were so graceful! They did not let the smallness of the stage come in their way. With  flourish and flair they breezed through a range of styles from Kathak, Mohiniyattam and semi classical. 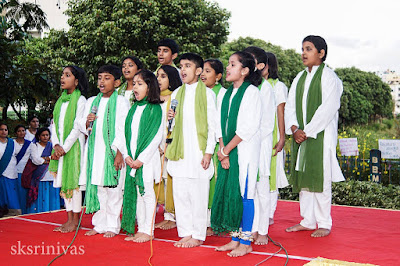 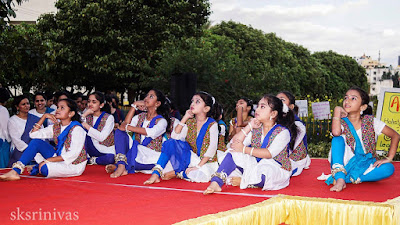 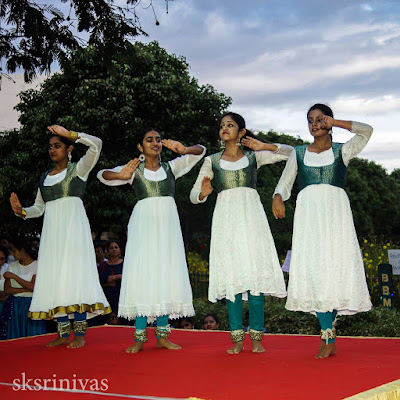 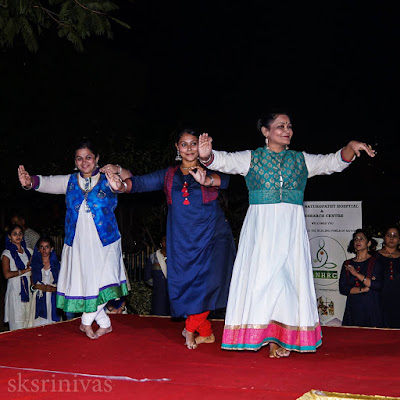 The finale by the gurus

As the sunlight faded, the finale items, "Namami Gange" and "Jal na jaye jal" were performed by the gurus Ms. Veena Bhat, Ms. Vinaya Narayanan and Ms. Uma Maheshwari. They became graceful silhouettes against the evening sky. Towards the end of their performance, their disciples joined, each one with a little lighted lamp, going around between the audience and their gurus on the stage. The comperes Ms. Sinchana Murthy and Mr. Ravi Bhat maintained the tempo beautifully.

Inputs from: Vidula Krishnaswamy and Divya Shetty
Photos: S.K. Srinivas (more photos can be seen on his Facebook page here)
Posted by PNLIT Admin (Arathi) at 8:00 AM