Requiem for our Puttenahalli Lake

It is with the deepest anguish and helplessness that I write this - our Puttenahalli lake is dying.

Our lake had clear rippling water a few months ago. Surrounded with lush vegetation, it had become a rich ecosystem and home to several species of birds. It was the walkers’ delight, venue for our year round environment awareness programmes for the community. All these may cease to exist. 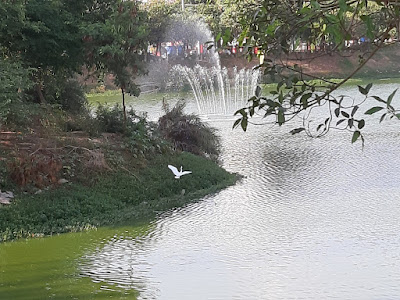 As our long time associates, donors, volunteers, child participants and residents, we owe it to you to explain why and how a lake that was a model for others in the city should suddenly be in such dire straits. Hence this detailed mail:

Simply put, raw sewage from Nataraja Layout is killing our lovely lake. A year or so ago when it was still a trickle we had alerted BWSSB, BBMP and KSPCB. See update on sewage situation May 2019.  On 3rd June 2019, the residents of Nataraja Layout got fed up of the underground drain constantly overflowing onto the road. They opened up the drain to direct the sewage into our lake. Raw sewage began to gush into the wetland.

16th Jun 2019, lull before the storm, sewage restricted to the wetland

We raised a red alert with the authorities. The Chief Engineer, Waste Water Management, BWSSB informed us that they had completed the procedure to replace the existing drain with a bigger one and issued a work contract. However, this had been stalled because the underground drain from Nataraja Layout  enters the lake premises below the walking track on the south east. The encroachers on the lake bund have built their houses and shops right along the length of the pathway.

As you are already aware, these encroachers had filed a writ petition in the High Court of Karnataka seeking for sites to be allocated to them, and not be disturbed from the lake bund in the meantime. On 7th March 2019, the Hon'ble High Court of Karnataka disposed of the Writ Petition filed by the encroachers with a directive to Principal Secretary (Revenue), Deputy Commissioner (Urban) and the Karnataka Slum Development Board that "Respondent Nos.1 to 3 shall take a decision on the representations of the petitioners in accordance with law in an expedite manner in any event, not later than twelve weeks from the date of receipt of the certified copy of the order. The petitioners shall not be evicted from the property in question till the decision is taken by respondent Nos.1 to 3.”  Closure of WP

We had personally handed over a certified copy of the judgement on 22nd March 2019 to the Respondents. Since then, we had followed it up with reminders (letters, emails, whatsapp messages) and personal meetings with them or their senior officers. We apprised them of the sewage situation and urged them to take an early decision.

The Principal Secretary (Revenue) called for a meeting a day before the 12 week time granted by the High Court was to come to an end.  At this meeting on 20th June, it was decided that the Slum Board should take a decision in this regard.

On 4th July, we met the Commissioner, Karnataka Slum Development Board who said that their role is restricted to recognised slums and the one on our lake bund is not a "Recognised Slum". They are encroachers and that the Karnataka Tank Conservation and Development Authority would be able to get them relocated. He spoke to the Deputy Secretary, KTCDA and instructed his Assistant Engineer to meet the DS (Deputy Secretary) at Vikasa Soudha after 3 p.m. that day. We insisted on accompanying the AE and met the DS who said he would write to the Revenue Dept. to remove the encroachers from the lake bund. The wheel had turned a full circle!

The  Deputy Secretary, KTCDA  asked the AE to give a letter from the Commissioner, Slum Board stating the facts. He had wanted this letter to be given without delay. However, even after two weeks, the Slum Board is yet to do so.

The court deadline of 21st June has passed. One of the Respondents had told us bluntly, “No one wants to bell the cat.” This is the last nail on the coffin.

The quantum of sewage is such that it is now flowing over the wetland bund into the main lake. Our Artificial Floating Islands have long been rendered useless. The treated water from South City and the fountain we installed this April are fighting a losing battle. Nevertheless, BBMP (Lakes) and BWSSB are trying to find alternate solutions to divert the sewage. Even if they come with any, we fear, it would be too late for our Puttenahalli Lake. 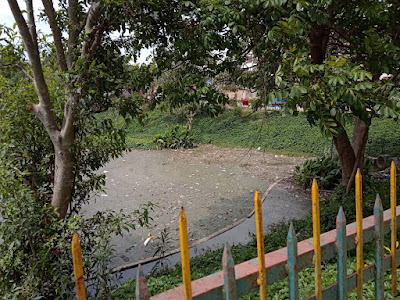 The average of samples taken from five different points and the reading in the wetland (where the sewage enters the lake) for January and June 2019 highlight the deterioration in the quality of the water.

June 2019
Average: 2.9 mg/lt;
Wetland: 1.7 mg/lt;
Many of you have seen for yourselves the evolution of the lake from a garbage dump to one full of life. As our partner, you know that this transformation had taken us several years to achieve. Its degradation is swift.

If the sewage inflow is not stopped immediately, Puttenahalli lake may soon become one more lake in Bengaluru killed as much by government apathy as by the pollutants.

In sorrow, helplessness and anger,