The Bangalore 10K was coming up and registrations had opened. I had not run even 10km in the whole of last year, I decided to skip it. End of story.

A few weeks later I came across an email that said that PNLIT, which is a small organisation, trying to do its best at saving and improving the neighbourhood lake, would be one of the participating NGOs in the fund raiser. That is when I decided to change my mind and participate in the marathon. And raise funds for it at the same time.

Time was short. I had about 20 days to go for the event and I started having second thoughts about if I could finish it. I eased into a routine for the first week and it seemed fine. But, in the second week, I had a small fall off the cycle, that took away a few training days. I realised that a sub 60 minute time for the event would not be possible. The lack of time defined both my targets: 70 minutes for the run and Rs.20,000/- for the fund raiser.

Closer to race day, the fund raiser was slowly inching towards the goal, probably better than my preparation for the run itself. I put in a run whenever possible and realised that I would be on target for a 70 minute run.

The race day and the run itself reminded me of one thing, peak hour traffic. My first 3k was spent dodging people and trying to make space between them. I settled into a rythm and at the 5k mark, I had taken 33minutes. I kept the reduced pace and continued, since I had a small cramp scare at around the 4k mark. But, I was happy that I had been able to make up the time lost in the first couple of km.

I kept it going and passed some people I recognised and thats the nice part of such events. I also happened to catch and cross a lady with a PNLIT bib around the 9k mark. Not sure who it was, but I did say a Hiya and pointed to the PNLIT bib on my back. I crossed the finish line at 1:09:15 over 11 minutes slower than my best time from a couple of years ago. I should be sad, but given that I did not really train for this event, I am not.

Later that day met up with some friends, if you can call them that. "Did you finish?" said one, while another quipped, "You are almost as bad as me". Ruthless :) . As I felt the well deserved beer flow down, I felt no need to justify. I did get a donation for PNLIT while at the event. See the brighter side? :)

Speaking of funds I am inching closer to the 50% of my targeted amount. The money largely has come in from my motorcycling club, Rolling Thunder MC; and one each from office and Arekere. Only 1 donation came from L&T South City itself. Being one of the biggest beneficiaries of PNLITs work, I had most hopes on it. My wife has been my fund raiser's largest supporter.

Back now, as I write this, I think this event helped me get started again. I will be running regularly, though as I write this, thanks to the time provided by a Bharth Bundh, I still have to get over this 10k.

P.S: You can still transfer to the fund raiser online, till June 10th. However, I will accept cash and will collect for PNLIT from your doorstep, if you don't like online transactions.

Harish (in yellow) and me flaunting our PNLIT bibs during the event. 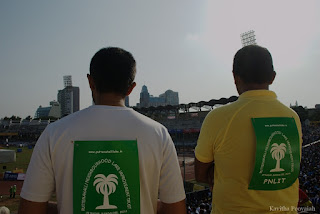