PNLIT mourns the death of Dr Elinor Ostrom, winner of the 2009 Nobel Prize in Economics for research that analysed how people can co-operatively manage common resources such as water and forests, without the need of government regulation or private ownership. She won the prize for Economics, though she was not an "Economist". Her work included lakes, and she was a keen supporter of Bangalore's lake revival.

Dr Ostrom's book of 1990 called Governing the Commons is considered as one of the "field guides" for conservationists involved with community projects. In the book, she takes the stand that most common resources are well-managed when those who stand to benefit are close to the resource and to each other. 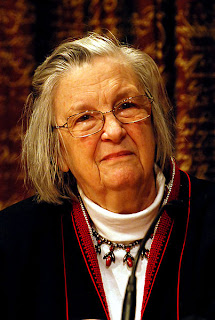 Elinor Ostrom
07-Aug-1933 - 12-Jun-2012
*
Dr Harini Nagendra, Urban Ecology Coordinator at ATREE Bangalore and Asia Research Coordinator at Indiana University, worked with Dr Ostrom and co-authored papers with her. In Feb 2012, Dr Ostrom was in Bangalore for the Khoshoo Memorial Lecture at ATREE, and she visited Kaikondrahalli Lake and planted a tree there. Read the obituary written by Dr Nagendra here.