An exciting afternoon at the lake!

Yesterday, some of us spent a delightful afternoon at the lake releasing some 3000 fish (fingerlings) into the lake. Fisherman Yellappa whom we've hired to remove the alligator weed from the water bought three species - Rohu, Katla and Glass Carp from the fisheries department. The Glass Carp is a herbivore and will nibble the aquatic weed.  All three are fresh water fish and common species, popular among fish eaters but the ones introduced today are specifically to attract birds and not for human consumption! 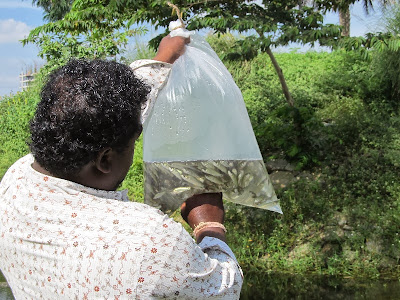 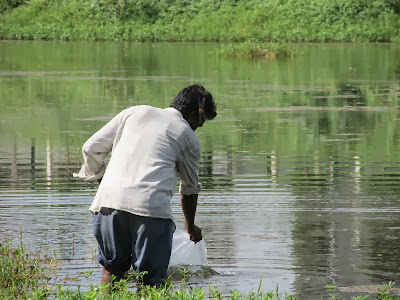 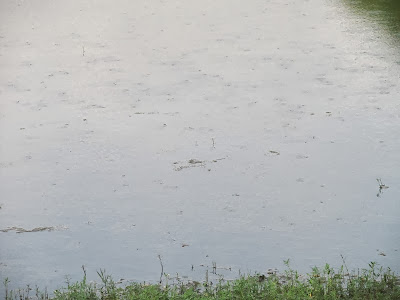 The specs are fish!

We also tried out our inflatable boat, that we got from a well wisher last year. Since the water level increased only from this monsoon, we were able to use it only now. Yellappa and others rowed a short distance in the water. They returned safely all right but, though we have life jackets, the rest of us preferred to remain on firm land! The boat is specifically for periodic monitoring of the waters, and to assist in deweeding. Boating is not on the agenda! 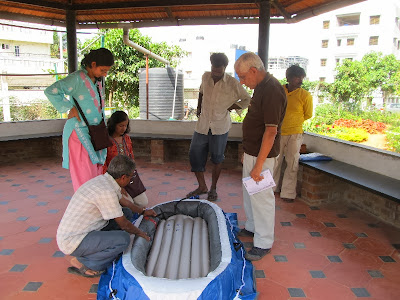 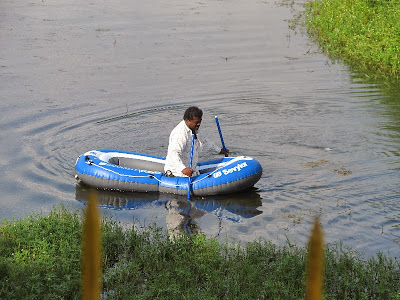 * We've bought casaurina poles of different lengths which Yellappa's men will plant at various points in the lake. These will serve the dual purpose of indicating the level of water and as a perch for the birds.
* We plan to introduce Guppies into the water soon. Guppy is a popular freshwater aquarium fish which feeds on mosquito larvae.

For those of you living in the neighbourhood - if you'd like to be a part of this excitement, please email <puttenahalli.lake@gmail.com>;. We'll inform you about planting the poles, introducing the guppies, and anything else.