One of the highlights of Navaratri is the Golu (Bombe Habba) when dolls are displayed tastefully on shelves. It is also an opportunity for the family to show their creativity by setting up a park or garden with sprouts and little figures. What is less known about Golu is that in earlier times the celebration aimed at encouraging dredging or irrigation canals and river beds. The clay thus removed was used to make the dolls.

One of the residents at South City invited me yesterday for haldi kumkum. Raji had arranged the Golu in the front room so I went automatically towards it and then stopped short. Near the wall, in front of the Golu steps was a very familiar sight - the Puttenahalli Lake! Raji and her young son Aditya had recreated the lake on thermocol with such attention to details that anyone who's visited the lake even once would be able to identify it! For good measure, on the wall was the PNLIT logo, the date palm! 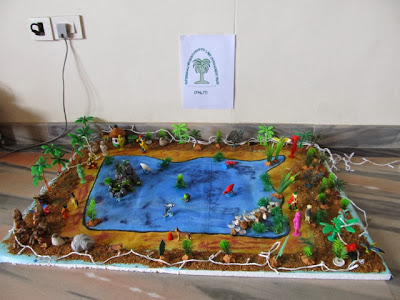 More pix can be seen here.

I forgot all about the formal assembly of dolls on the shelves and sat on the floor in front of the lake as mesmerized as I am with the real lake! Did Raji know the ancient significance of the clay dolls? Perhaps not but what she and Aditya had done was truly to celebrate the rejuvenation of the lake. This is an honour each of us trustees will treasure for ever!

The vital role a lake plays is to act as catchment and prevent flooding in the area. Last night saw perhaps the heaviest shower in a long time and the water level in the lake has gone up by at least three feet or more. 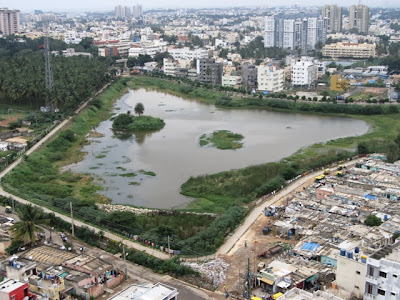 Even with the bulk of the water going to the lake, there's water logging at various places. Imagine what would have happened if our lake had gone the way of hundreds of Bangalore's now extinct lakes! Truly, we do need to celebrate lakes by nurturing each one of them.

Navaratri greetings to all
Usha