Four years ago on this day, four people were waiting at the sub-registrar's office in JP Nagar to get a trust deed registered. Along with them, two others, who were to sign as witnesses. They were well prepared, having drafted the document themselves, getting it reviewed by the sub-registrar office clerks a couple of days earlier, carefully printing it, with all the papers that they had been told to bring. However, given the reputation that the sub-registrar offices have, it would be wrong to say that they were not worried about being put in an uncomfortable spot at some stage. It took but an hour or so. They were done... mugshots, signatures and all, and with the satisfaction that it was a "clean" effort. PNLIT was born! From 4 we are now 400+ (likes on Facebook!) and growing. 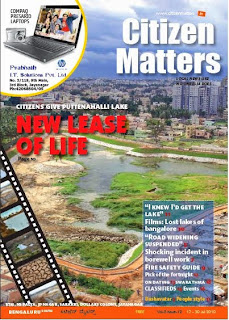 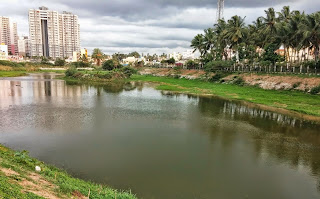 The past four years have been very eventful, as you will have realised, through first hand experiences at the lake, participation in PNLIT's activities and the regular emails/ blog updates we send out. There have been bouquets of joy and pools of sorrow, quite literally! Yes, the trees planted four years ago are blooming.

For those of us who have been closely involved with PNLIT, the learning has been tremendous, and as varied as it can get (ranging from technology to finance to human resource management to education to governance to just common sense!). The support received from various quarters has been critical in meeting challenges as they appeared, and working around unforeseen situations.

Sincere thanks to BBMP and other government authorities, staff, donors, volunteers, vendors and everyone else who has made the four years totally worth it!

There is much still to be done. PNLIT meets the expenses for the upkeep of Puttenahalli Lake and for its other activities, mainly through donations received from the public. PNLIT is recognised as a charity and donations are exempt u/s 80G of the IT Act. With almost no administrative expenses, you can be sure that your money is well spent. If you would like to support a charity, do consider PNLIT. For details on how you can donate and help please click here.

I went to the lake a couple of days back; the pre-moonsoon showers had just stopped.
The lake never looked more beautiful; the flowers never looked so gleeful; the tree lined path never looked more welcoming. [Only regret -- I had no camera].
The experiences of the core team has been varied; so has it been for all residents. From lake deweeding, to nature walks, to song and dance -- the lake never ceases to engage us, enrich us.
Though challenges remain or even increase, nothing can impair the spirit that is committed to serve and save .
Warm regards. Best wishes for the coming years.