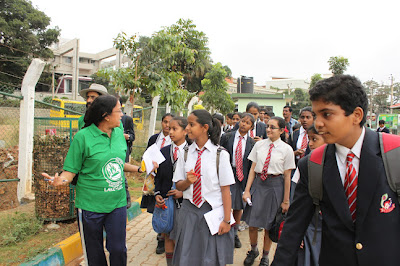 The water level has reduced due to evaporation and the delayed monsoon but many more birds have shifted residence to our lake. A Grey Heron has joined the resident bird community and the Purple Herons have increased in number. The children were thrilled to see the Little and Great Cormorants fishing and drying their wings. Jaishree showed them a Sunbird. The excitement of the morning, however was the sighting of a Tailorbird, hitherto not spotted at the lake.

A tiny thing, the Tailorbird makes up in speed of flight what it lacks in size. Veteran ornithologist Zafar Futehally says that the Tailorbird is a common bird which is finding it difficult to get insects because of the pesticides being used extensively. PNLIT Shutterbug Harish Mahendrakar who was at the lake to catch the early birds on his camera said, "Only saw the tailor bird... Could not click :( ."

With the zeal of Salim Ali, the Father of Indian Bird Watchers, the children ticked off the names of the birds they had spotted in their copies of PNLIT's Sighting Booklet. The little booklet containing information about the lake and a list of the plants and birds at the lake was an invaluable souvenir for them to carry back home from their visit.

For PNLIT-guided tours of Puttenahalli Lake, do get in touch puttenahalli.lake@gmail.com Cell 7259722996.
Posted by Arathi Manay at 11:36 AM