Those familiar with cricket would know that "doosra" is a cricket term that refers to a type of delivery bowled by off-spin bowlers (just like a "bouncer" is bowled by fast bowlers). Off-spinners generally bowl off-breaks. A doosra is the opposite of an off-break, i.e. it spins in the direction opposite to an off-break, taking the batsmen by surprise because the delivery he receives would not be what he expects.

"Doosra", an English play written and directed by Anand Raghav and performed by Paradigm Creations seems to have lived up to its name and surprised many who saw it.

Sanjay Mysoremutt, a JP Nagar resident who who attended one of the two charity shows staged at MLR Convention Centre, JP Nagar in aid of PNLIT, said, "The play was brilliant, enjoyed it more than watching a good movie! Excellent use of video and live performance. And I expected it to be a good comedy but it was deeply thought-provoking as well beyond the topic of cricket, especially the parent-child relationship and discussion on values."

The 90 minutes of "Doosra" very vividly depicted the changes in the game of cricket - from 'the' gentlemen's game to a commercial venture. The humour throughout the play had the audience in splits while also touching them in a more serious way. Video projections of cricket match scenes as a backdrop made the play unique in that it felt like watching a real match. 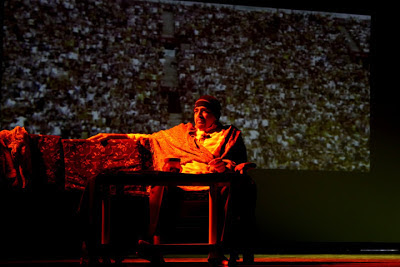 Ganesh, a 20-year old ambitious cricketer finally gets selected to represent India. With this, his life sees significant changes, driven by power, politics, money and pressure. Ganesh's parents try to guide him onto the path that they see as the right path. To know how Ganesh's life progressed after the brushes with fans, teammates, bookies and politicians, wait for the next show of Doosra!

This was the first time that PNLIT was organising a fund raising event of this magnitude. It would never have been possible without the support of the Paradigm Creations theatre team, the team from Brigade Hospitality's MLRCC and the volunteers from the Puttenahalli Lake area. PNLIT is sincerely thankful to all those who helped in reaching out to people, talking to them about Puttenahalli Lake, PNLIT and the play, getting donations, spreading the word and doing everything else to ensure that the event went off smoothly. A big thank you to all the donors. 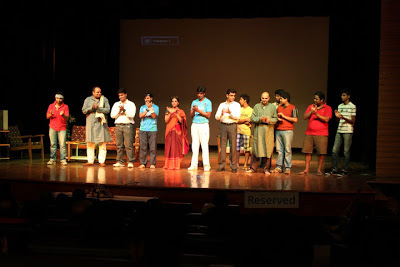 Chander, who attended the play wrote, "It was a superb double whammy and has inspired my family to join in your cause for the development of the lake.We are on standby for any help and assistance and would consider it as an honor and privilege to be a part of this great effort that you have initiated with the other trust members."

PNLIT hopes that many other Bangaloreans have also been touched in the same way as Chander and will help in the rejuvenation efforts at Puttenahalli Lake and other lakes in Bangalore - by supporting, volunteering, donating.

Photos of the evening, taken by PNLIT Shutterbug Harish Mahendrakar can be found here.