Not many of us would know that today, 2nd February is observed as World Wetlands Day. On this day in 1971, the Ramsar Convention (Convention on Wetlands of International Importance) was signed in Ramsar, Iran and the day has been officially celebrated since 1997. 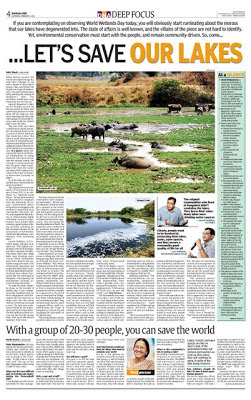 The DNA, Bangalore today devoted an entire page of its newspaper to Bangalore's wetlands. Among other things, it makes mention of the efforts at Puttenahalli Lake and carries an interview with PNLIT's Usha Rajagopalan.

The Ramsar Convention is based on the following premises:

* RECOGNIZING the interdependence of Man and his environment;
* CONSIDERING the fundamental ecological functions of wetlands as regulators of water regimes and as habitats supporting a characteristic flora and fauna, especially waterfowl;
* BEING CONVINCED that wetlands constitute a resource of great economic, cultural, scientific, and recreational value, the loss of which would be irreparable;
* DESIRING to stem the progressive encroachment on and loss of wetlands now and in the future;
* RECOGNIZING that waterfowl in their seasonal migrations may transcend frontiers and so should be regarded as an international resource;
* BEING CONFIDENT that the conservation of wetlands and their flora and fauna can be ensured by combining far-sighted national policies with co-ordinated international action;
More related information can be found the on site of The Ramsar Convention on Wetlands.