In its fourth edition, with a record 61,000 nominations for nine categories in the prestigious Namma Bengaluru Award, 2012 (NBA) which recognizes the "unsung heroes; ordinary people who do extraordinary things so that the city can move forth in to the future" the odds of winning were stacked against everybody.


We had been shortlisted last year and the excitement continued this year as well. However, with a great deal of work yet to be done to make the lake ready for the monsoon, we tried not to think too much about the NBA. Our lake was in no condition to receive visitors but the organizers sent someone over to do a due diligence of PNLIT's work. Before we could meet him, he had already quizzed the two groups of men who were working at the lake. One group was digging a trench for the diversion channel to harvest rain water from the road and another was enabling a system by which we could draw water from the lake for the plants. We chatted and he left without taking a single note. More work is the best way to stop worrying or thinking of things beyond our control.


We were not the only busy ones, the Namma Bengaluru Foundation was following their own timeline. The Award function was on 16th March and the countdown must have begun to sift through the 53 short listed nominees and make their final selection.

It was the Award Day at last and we reached the venue well in time.

Malleswaram ground. What did it look like normally? Certainly not as it looked that evening. Colouful pandal, lights, volunteers, music, stalls, vigilant policemen and people streaming inside. The next few hours were surreal. We simply didn't know where to look! Do we see the dancers, the VIPs entering, the huge stage brightly lit (with Raghu Dixit's drums in silhouette), speed artist Vilas Nayak who won as much applause for hailing from Malleswaram as for his swift but dramatic creation of Kempe Gowda 1, bearing a shield and sword or of "Bangarada Manushya" Dr. Raj Kumar?

The stage was set for announcing the winner in each category. Fellow trustees Nupur Jain and O.P. Ramaswamy sitting on either side of me were a study in contrast. Nupur was on the edge of the seat, clearly unable to control her tension. OPR was his usual calm and composed self. Beyond him sat Prasanna in deep conversation with PNLIT well wisher Jagadeesh Maiya who had come to cheer us just in case we won. Unable to join us in person, trustee Arathi Manay watched the webcast in Mumbai biting her nails perhaps! She had the presence of mind, however, to forward the link to the PNLIT e-group, several of whom watched the live streaming as well. 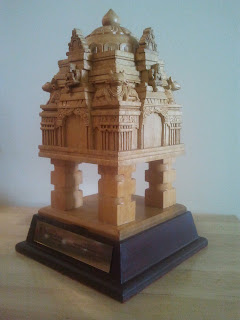 The winners in several categories had been announced. All individuals. What if we won? Would all of us go up to receive the award? What would we do afterwards? There were only 11 chairs for the winners on the dais. We have to give a speech? Oh, oh. Questions, mumbled answers, rising tension as the nominees in our category "Citizen Groups/NGO" were named.

Eleven names, the maximum in any category. Each one highly deserving of The Award. Who was going to be the lucky one? Show host Vasanthi Hariprakash invited a dignitary to announce the winner. We were far too tensed to remember his name but we needed to hear only the first word from his lips to cheer and jump from our seats! When we went up to the dais, it was in a daze, not hearing the applause, not seeing anyone but the Chief Guest, Prof G Venkatasubbaiah, all of 100 years, renowned Kannada lexicographer who handed over the trophy, replica of Kempe Gowda's tower (which had marked the four boundaries of the city) and an envelope. A battery of photographers froze that moment, a milestone for PNLIT. 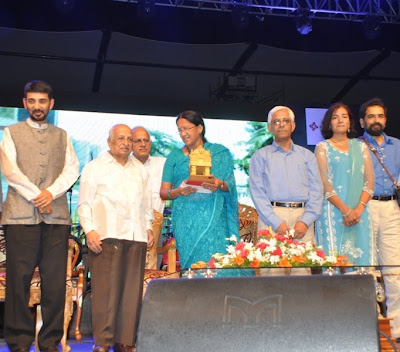 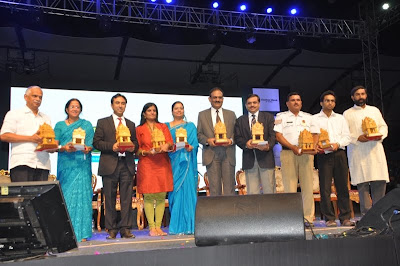 As Chairperson, I delivered a speech which was short but after the really brief ones by earlier winners, I seemed to speak forever! I'd like to repeat the thought with which I concluded - A Big Thank you to the Environment Cell, BBMP and to each individual who helped us along the way. Their names are too many to be listed here but we are so grateful to them and to all our volunteers and donors who are helping us transform the lake and finally to our families for tolerating our madness, our obsession with lake restoration. 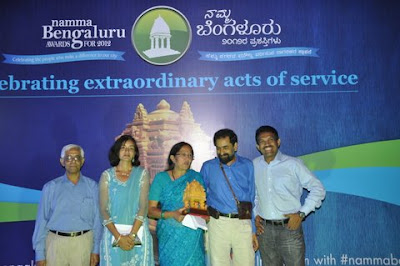 We relived the excitement the next morning with our volunteers who'd come to work at the lake. The award belongs as much to them as to PNLIT. 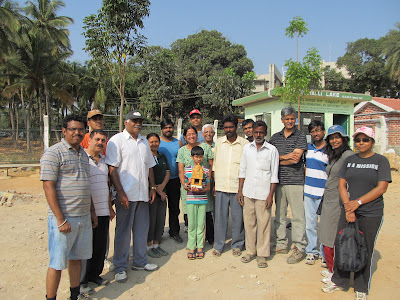 Volunteers with the NBA trophy

For a more objective account of the NBA function, please see the report here.

cheap replica watches said...
This comment has been removed by a blog administrator.
January 21, 2015 1:07 PM