The weekend that was

Bosch Volunteers at the lake

The volunteers who come to work at the lake have always impressed us with their dedication and hard labour. The group of 30 Bosch employees who came to Puttenahalli Lake this past Saturday was no less. After a brief introduction and welcome, they set to work in two teams as planters and diggers.

The planters had a short stretch of flower bed in which to plant Lantana. Nupur guided them on how to take out the plant out of the pot with its roots intact, planting it in the pit and packing the soil around the base. The others grabbed spades, pick axe and even heavy crowbars to loosen the soil so that their friends could pull out the weeds. Their work was initially confined to the ground around the exercise bars but their pace was so swift that in no time the leaf composter was filled to the brim. They dug out rocks hidden below the ground and made a heap of them. Clearing the hard ground around the the base of the two Mahogany trees was done in a jiffy. They dug a pit around the base and planted Portulaca. Our PNLIT stone was surrounded with Portulaca as well.

We then set the eager beavers of planters and diggers to clear the side of the walking track overgrown with weeds. Once cleared, they planted rows of white lilies. What we particularly liked about their approach was that they took the trouble to clear up as well. They swept the place, gathered stones, plastic and trash and piled garden waste in the wheel barrow and took it all the way to the corner plot reserved for composting.

Special mention must be made of the quartet who, led by Ravi Suresh, quietly worked within the inner grill clearing the weeds around the plants which other volunteers had planted a couple of weeks ago.

By 10 o'clock when they decided to put spades down, it was with a great deal of satisfaction, both for them and for us. Their leaving was on a high note with Manjunath Phadnis sweeping into the car park in his personal auto! Sporting the Bosch sticker and the CNG label, his auto is by far one of the best maintained we'd ever seen in the city. Nupur took a ride in it home and gave her thumbs up wholeheartedly. It was for the first time that she also didn't have to wrangle with the driver! 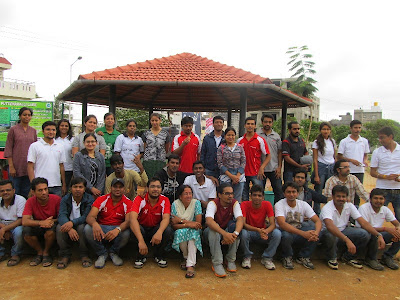 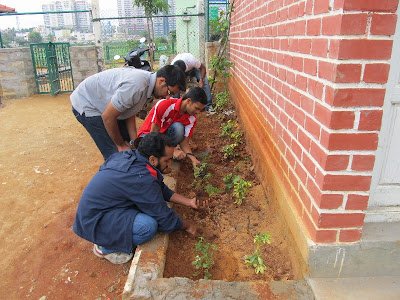 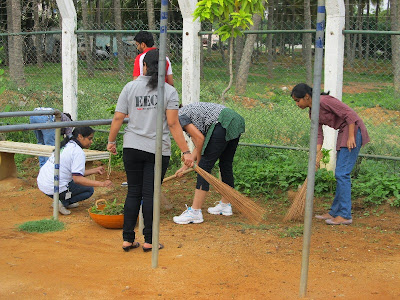 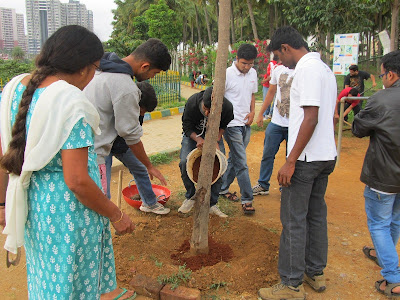 Clearing the base around a Mahogany 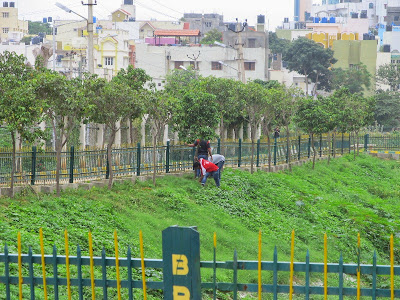 Far from the crowd 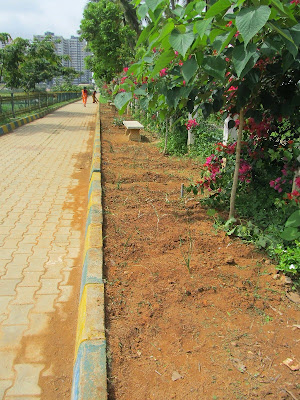 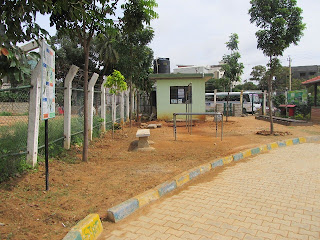 More pictures on picasaweb can be seen here.

The walk, organised by the Bangalore Chapter of Rang De Rang De was done around Puttenahalli Lake, with me representing PNLIT. Some 35 people from across the city and the neighbourhood had assembled for the walk which began at 11 a.m. and ended at 12.30 p.m. I took them through the PNLIT journey from the early "save the lake" days to now being recognized as a "Change Maker." This has been a journey in which we've been so ably supported by all our donors and volunteers. Two highlights about the walk will stay in my mind for a long time.

We had put up a small photographic exhibition showing the plight of vanishing lakes in the city; of Puttenahalli Lake before, during and after restoration and of the rich aquatic life it supports. This attracted attention not only of the Walk participants but also several others who saw the photographs and left. One man however, tall, bearded, with a towel tied around his salt and pepper hair stayed on while I made the presentation.
Talking about our effort to fill the lake with rain water, I went closer to the grill where the man stood, to show the group the newly installed diversion channel. I thought he would leave at least then but no, he didn't. Instead he heard the narration and began walking with us. Finally, he said in Kannada, "Though you were speaking in English, I could follow a little. You were talking about clearing the lake. Yes, it does need to be kept clean." Without waiting for a response, he walked away. This is an affirmation that I will cherish but how I wish my fluency in Kannada was better!

Another memorable moment was with Soumya and her daughter, among the first people to reach the lake. The girl of about 7 years was clearly delighted to be there. Soumya explained that the child had visited the lake in a trip organized by her play school a couple of years ago or so. Since then, every time she went past the lake, she had insisted on her parents stopping the car and bringing her inside. She validates our belief in promoting conservation through children.

An appeal especially to parents living in the vicinity - please bring your children to lake and introduce them to Nature. It is a lesson they will treasure for life. 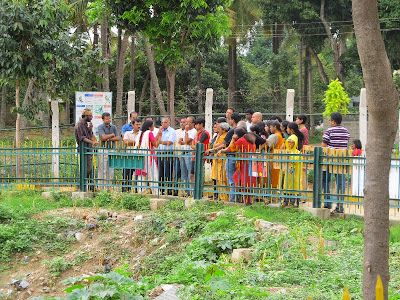 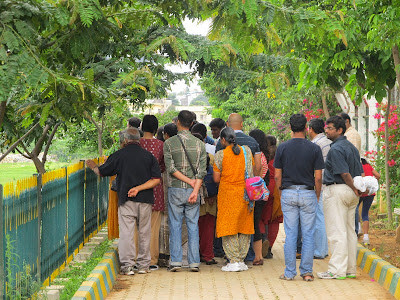 Nice intiative, Great work for environment. and my suggestion is to use vermicomposting while palnting trees to get better growth results.