“Once there was a tank called Puttenahalli Puttakere….”

As many may have noticed, BBMP has been cleaning our little Puttenahalli Lake in J.P. Nagar 7th Phase, for nearly a month now. After ‘dewatering’ the lake, they began to remove the contaminated soil, from the surface in some places and further below at others.  A fortnight ago, these pits filled with black water and at other places, damp patches formed where weeds began to grow. The underground water was getting exposed by the digging we thought, but the patches became pools which grew in number and size. 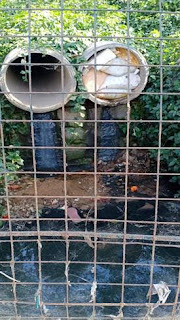 On 3rd February, our gardeners reported that water was entering the wetland through one of the inlet pipes which discharged surface runoff from South City. We contacted the apartment complex immediately. They checked and rechecked. This inflow wasn’t from South City.

Was this leakage from the newly installed UNDERGROUND DRAIN (UGD) that BWSSB had laid last year?

The ward office sent a contractor to locate the source and plug it. By then, there was some seepage from below the inlet pipes as well. He suggested that we block the pipe with sandbags. The back flow would indicate possible source which could  be repaired. We did as he asked.

The sandbags remained in place and dry though the seepage from below the pipes increased as did the water level in the lake! In just four days, i.e., by Sunday 7th Feb., many of the pools had not only grown but, they and the trenches dug by the excavators had vile, floating mass which was visible from a distance. We knew only too well just what it was - sewage. Once again.

THIS IS NOT THE FIRST TIME

In 2017, an occasional trickle of sewage from the UGD at Nataraja Layout began to enter the lake through the storm water drain. Each time, the BWSSB Ward Office removed the blockage with a jetting machine. When it became a regular feature, we escalated the issue to the Head Office, but no action was taken. The polluted water led to a massive fish kill in March 2018. 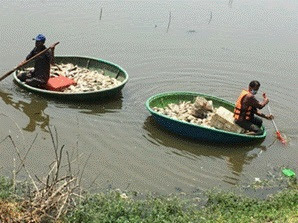 We desperately tried to alleviate the damage by installing an aerator fountain in April 2019. However, infuriated with the sewage overflowing on the road, the residents of the layout opened up the drain and led it directly into the lake on 3rd June 2019. Sewage started to gush inside.

LAYING OF THE (NOW LEAKING) UGD:

In deep anguish, we were on the verge of giving up altogether when we appealed to Sri Jayaram, then Chairman, KSPCB and later at a meeting of the NGT Green Tribunal Committee chaired by Hon'ble Justice Sri Santosh Hedge. Sri Tushar Girinath, then Chairman of BWSSB who was present at this meeting agreed to get the existing UGD replaced with a bigger one but warned that the slum could be an obstruction.  Nevertheless, he kept his word and work began in August 2019.

Working between the sewage filled lake on the one side and the illegal houses on the other, progress was very slow. All the while, the slum dwellers kept a keen watch and, nervous for their safety, even picked up fights with the workers.

At the stretch where a few houses came in the way, BWSSB compromised by laying that section of the pipe on the REVETMENT on the water side. This exposed pipe developed cracks and the contractor’s patchwork repair gave way at least twice in January 2021. 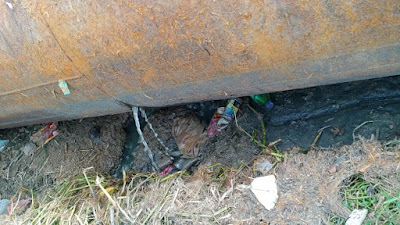 Now, not only was this section leaking yet again but along with it, the entire length of revetment along the new drain was damp and foul water was collecting to form pools. 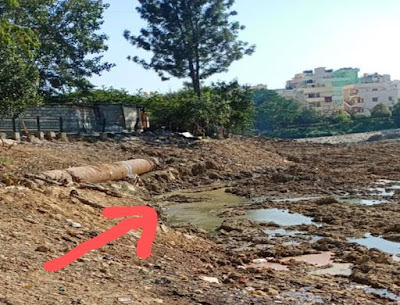 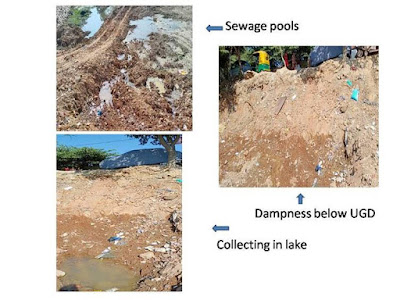 BWSSB responded at once to the alert and worked till the early hours on 11th Feb, to clear the blockage. They are still at it today. While we appreciate their prompt response, jetting or temporary measures will not do. They need to come up with a permanent solution if the lake is to be saved.

COULD ALL THIS HAVE BEEN AVOIDED?

Yes. If only the government had acted on the Order of the Hon’ble High Court of Karnataka, passed on 7th March 2019 in W.P. Nos. 5073 – 5187 / 2015 (GM –RES).  These Writ Petitions filed by the slum dwellers were disposed of with a direction to (1) Principal Secretary (Revenue), (2) Deputy Commissioner and (3) Slum Board to take a decision on the slum dwellers’ representations (to the Deputy Commissioner on 23.09.2014) where they asked for allotment of individual plots instead of the temporary sheds already built for them by the Slum Board (and which they demolished in July 2018).

The Court gave twelve weeks’ time to the Respondents. On the 7th of March, next month, it would be two years since the High Court passed the order. The authorities concerned are yet to take any decision.

Time and again, we reminded them of the High Court order and the urgency for early action, given the sewage inflow. Frustrated at the Respondents passing the buck from one to another, we met the Additional Chief Secretary (Urban Dev.), the Chief Secretary (twice) and emailed the Chief Minister of Karnataka. In Jan 2020, we filed a case with the LOKAYUKTA to take action against the errant officials for dereliction of duty.  The next hearing is on 3rd March but, going by our past experience, we are fairly certain that the matter will get postponed further.

HOW LONG CAN A BUND THAT IS ALREADY WEAK, HOLD UP, BEFORE ENDANGERING THE SLUM DWELLERS?

Way back in Sept 2017, we had alerted  BBMP and all the Respondents about the poor condition of the bund on the slum side. The inner grill had tilted in places and sections of it had fallen down.This happened because these residents had levelled the slope at many places to grow vegetables, fruit and flowers. In the process, they dislodged the boulders that were embedded on the bottom half of the revetment. On 28th May 2020, one of the houses on the bund collapsed and was quickly rebuilt. Since then, the bund has grown considerably weaker. The inner grill is almost nonexistent. 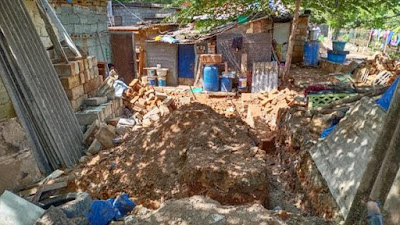 BBMP planned to strengthen the bund once the lake basin is cleared of the sewage sediment. With the UGD still leaking, and likely to do so in the future, what will they do now? 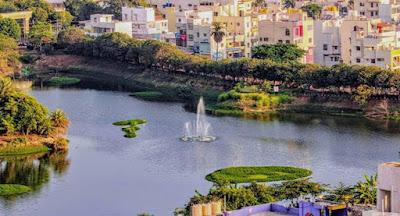 From 2010, working closely with the BBMP, residents from the neighbourhood and CSR partners, we toiled to bring a dry lake back to life. We overcame several obstacles on the way but 11 years later, the biggest two still remain – encroachment and sewage.

We have no words to describe our feelings at this point. If this situation continues we, and you, will soon have to say, “Once there was a tank called Puttenahalli Puttakere….”