Brief background: Spark the Rise is a platform built by Mahindra "for ordinary people to take charge of India's future". Anyone with a plan could submit it to www.sparktherise.com to get volunteers, advice or donations. From August 2011 to March 2012, 1346 projects were posted on the site. For six months, Mahindra awarded monthly grants of Rs 4 lakh each, to 8 outstanding projects. "PNLIT - Nurturing Puttenahalli Lake back to its pristine glory" was one such awardee, and one of the 18 projects in the Grand Finale, where additional grants were at stake.

20th April 2012 was an eventful day for the Spark the Rise finalists in Mumbai. The winners of the additional grants were to be announced!

Mahindra had arranged for our accommodation at its company guest houses and of the 18 finalists, 9 of us were put up at the guest house 'Jasmine', in Bandra. We spent the morning getting to know each other, our projects and plans for the future and found that there were good opportunities to collaborate in various ways. Incidentally all the four winners of the finale were from among the nine of us at Jasmine!

It was a long drive from Bandra to the Prince of Wales Museum in Fort and it gave us more time to get to know each other. Though most of us had just met that morning, at the end of the drive some of us felt like we knew each other for years! After lunch, Mahindra had organised short group discussions between the project finalists and influencers in the fields of innovation, entrepreneurship and movements, and talks on how social ventures can increase their impact. This gave us all a chance to exchange visiting cards for future contact.

During the high tea that followed, we had the opportunity to interact with those present at the venue (including Mahindra employees, Mumbai-based projects of earlier rounds and others who have been involved with the Spark the Rise movement in some way) and it was heart-warming to find several people empathise with PNLIT's work and relate it to their own cities and even rural areas. "Vanishing" open spaces and lakes seems to be prevalent everywhere. A recent news item indicates that the Brihanmumbai Municipal Corporation is trying to reverse this by spending crores of rupees on acquiring lands at market rate, to be used as open spaces.

The glittering awards function on the lawns of the beautiful Prince of Wales Museum was attended by Mr Anand Mahindra, Mr S.P. Shukla and other senior people from Mahindra. We had the pleasure of being entertained by Vilas Nayak (speed painter) and Aditya Kalyanpur (tabla player), and also Tisca Chopra (actor, Taare Zameen Par fame).
For me, it was an absolute honour to be representing PNLIT on stage along with the other project finalists. It was disappointing that PNLIT did not figure in the eventual list of 4 winners who were chosen based on public voting (30% weightage) and jury voting (70% weightage). 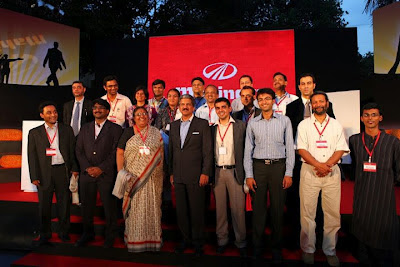 Though PNLIT did not win additional funding on Spark the Rise, we have definitely got nation-wide visibility over the last few months. We hope that this has helped in building awareness of the importance of water bodies and public open spaces, and the instrumental role of local citizens in safeguarding their environments.

As the Rise team says, this is no end - it is merely one milestone in a long and powerful march towards a better future. Same for PNLIT too!
Best,
Arathi
Trustee, PNLIT